I don't know about you, but I'm a guy who prefers the world to remain in its natural order. The sun rises in the east, sets in the west, etc. And in this world order, the Detroit Tigers should regularly defeat the Kansas City Royals. 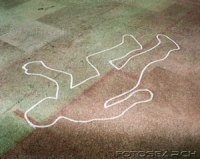 When something comes along to shake up that order, it's not always a bad thing. It may be jolting. The Royals' 6-0 record so far this season against the Tigers probably fits into that category. But such freak occurrences can remind us of how important it is for the world to work a certain way, and order will impose itself to make a correction.

I didn't necessarily think the Tigers would make up their 15-run margin with the Royals in one game. But the guys in that clubhouse must have been sick of seeing that 26-11 run differential and decided to take care of it in one game. Hell, Miguel Cabrera and Matt Joyce almost covered it by themselves, with 11 RBIs between them.

Poor Jimmy Gobble almost gave back that 15-run margin by himself, allowing 10 runs (with seven hits and four walks) in just one inning of work. Even Nate Robertson was shaking his head, thinking "Oooh, that's bad" after seeing that carnage. Someone needs to check that kid for post-traumatic stress disorder today. He's going to be jumping at the slightest noise for at least a few days.

Heroes? Golden Tiger Claw winners? Take your pick. The aforementioned Cabrera matched a career-high five hits and six RBIs. Joyce had four hits and five RBIs, yet another strong argument for staying in the lineup. Gary Sheffield hit a three-run homer, looking as healthy as he has all season. (But is he hitting better because he's fully healthy or because Jim Leyland is handling him exactly the right way?) And Zach Miner - for one game, at least - quieted any doubts about rejoining the starting rotation. No runs and three hits over six innings is exactly what the Tigers needed from a starting pitcher not named Justin Verlander or Armando Galarraga.

Let's just hope the Tigers saved some order-restoring baseball for the remaining two games of this series.

But it looked like the Tigers might need every one of those 19 runs once Miner left the game and turned it over to the bullpen. Should we begin to worry about Freddy Dolsi? After the four runs he coughed up last night, Dolsi has allowed six runs, along with five hits and no strikeouts, in his last 1 2/3 innings. Should he begin to focus more on pitching instead of shearing the hair off his teammates and collecting $200 paychecks for his barbering?

And Aquilino Lopez shouldn't be let off the hook, either. Both of the runs he gave up were charged to Dolsi, but he still allowed them to score. That's not exactly cleaning up a mess. In his last 4 2/3 innings, Lopez has allowed nine hits, four runs, and three walks. Does anyone smell gasoline?

For the full effect, check out Royals Review's game recap, "Yes, That Happened."

And the KC Star's Joe Posnanski also chimed in with a look at the horror - the horror! - that was Jimmy Gobble's performance, while also spotlighting the one highlight for the Royals: Tony Pena, Jr's one scoreless inning of pitching.

I expect to get hammered for admitting this, but I conked out after the fifth inning and missed quite a bit of the GameThread fun. That's what I get for cutting my lawn before watching baseball, I guess.