Share All sharing options for: Pouring It On: Tigers 7, Royals 1 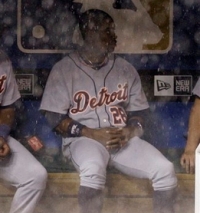 As the old saying goes, when it rains, it pours. But it's been worse than that for the Kansas City Royals this week. In two games, the Detroit Tigers have poured on the runs. And then, after 6 1/2 innings, the rain came down.

Two-and-a-half hours later (I'll sit out that kind of delay when I'm in the ballpark, but not when I'm sprawled out on the couch, and the clock's moving past midnight), both teams were brought back out to finish up the game. If only the Royals had played their half of the inning, everyone might have been spared the long wait. Especially with a day game to follow.

Kenny Rogers bounced back after a couple of semi-rough outings (and two losses against Kansas City this season) with one of his best performances of the season. The Royals only managed four hits off him in six innings. And three of those hits were by Rogers' arch-enemy, Mark Grudzielanek.

“I was really good except for Mark,” Rogers said. “It’s ridiculous. He is hitting like .800 off me. I threw one pitch eight to 10 inches off the plate and he doubled down the line. I’ve thrown him everything. The catcher doesn’t have enough fingers. I told him when I was walking off that the next time I was going to throw him a knuckleball and I don’t even throw a knuckleball. I wasn’t joking. He’s hit everything else.”

Grudzielanek is actually hitting .652 (12-for-23) against Rogers, but who's counting? Well, I guess Royals manager Trey Hillman is, since he batted Grudzielanek (and really, I'm just seeing how many times I can type that name in a post) third in the lineup last night.

So the Tigers didn't need much offense, but the bats brought plenty. Whenever Placido Polanco jacks one over the fence, you figure it must be a good night. Magglio Ordonez also showed that oblique isn't bothering him anymore, with three hits and two RBIs. And the middle-to-bottom portion of the order continued its solid contribution, as Miguel Cabrera, Matt Joyce, and Gary Sheffield each drove in a run.

Also, just between us, Edgar Renteria got two hits last night. Slump busted? Well, let's not get crazy. But keep an eye on that.

Did Jimmy Empty the Chamber?

Something else to watch out for in today's series finale is a point Billfer brought up in his recap. Was it really a good idea for Jim Leyland to use Fernando Rodney and Joel Zumaya the way he did? In a game that was out of hand, and a day game some 12 hours away? Rodney, in particular, looked great, striking out four batters in two innings. Zumaya also pitched a scoreless frame. And best of all, neither of them walked any batters. But will either of them be available today?

Maybe Leyland didn't have much choice, with Freddy Dolsi and Aquilino Lopez pitching on Monday, and Rogers having to be shut down after the rain delay. If it's a tight ballgame this afternoon, there could be some problems.

We had a good turnout in the GameThread last night, so it's disappointing that the rain forced most of us to break up the party early. I'm also wondering why I fell asleep early on the night when there wasn't a rain delay. Oh, well.