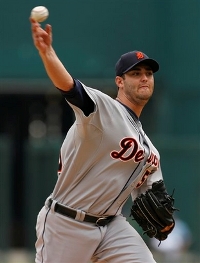 Six innings of perfection. Armando Galarraga knows how to end a five-game winless streak in style. (In fairness, he pitched well in three of those games.) Ground 'em out or strike 'em out, Galarraga sent Kansas City hitters back to the dugout with machine-like efficiency.

When the Royals finally broke through on David DeJesus' single in the seventh, it brielfy looked as if Galarraga was rattled enough to lose focus on the bigger picture. A walk and two singles later, Kansas City finally had a number besides zero on the scoreboard. But Galarraga pulled himself together and got out of the inning.

One thing that surely helped him maintain his composure was another bucket full of runs from the Tigers' offense. Magglio Ordonez had his second straight three-hit, two-RBI day, and Miguel Cabrera knocked in another three runs with two hits of his own. And was that Edgar Renteria with two hits today? Along with a slick play on Joey Gathright's grounder up the middle to end the sixth inning and preserve Galarraga's perfect game?

Galarraga may not have been perfect, but just about everything went right for the Tigers in this three-game series. And after finally beating these Kansas City Royals, Detroit finds itself 5 1/2 games out of first in the AL Central with three games against the White Sox this weekend.

Judging from the turnout in the GameThread this afternoon, your office may not have gotten much work done if you have any Detroit Tigers fans on staff. Hey, blame the schedule.