One is Better Than None: Tigers 6, White Sox 4

Share All sharing options for: One is Better Than None: Tigers 6, White Sox 4 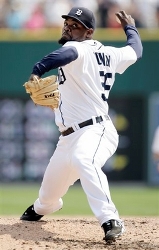 6 1/2 games out of first place is better than 8 1/2 out. It's not as catchy a slogan as "Who's Your Tiger?" and probably shouldn't be a slogan at all. But after a weekend in which the Detroit Tigers didn't really accomplish what they hoped (or needed) to do, salvaging one victory is something of a consolation.

Zach Miner threw his second straight quality start, keeping a hot White Sox offense in check until the Tigers' bats swung the bat with authority in the third inning. Curtis Granderson hit a home run to put Detroit ahead to stay, while Miguel Cabrera knocked two hits for the third straight game and drove in two runs. (Cabrera, by the way, has hit safely in his last seven games, batting .375 - 13-for-35 - with 15 RBIs during that span.)

But the real pitching story came in the eighth inning, when Joel Zumaya left after facing two batters. No discomfort was obvious from watching Zumaya or trainer Kevin Rand, but it was later revealed that tightness in the right triceps was the problem that took Zumaya out of the game. (His status is listed as day-to-day.) That brought in the Tigers' new closer, who got the job just before game-time.

Did having to rush in and warm up on the field, rather than in the bullpen, affect Fernando Rodney upon entering the game? We may never know, though being taken out of a routine can be a jarring thing for an athlete. Rodney certainly seemed to be off initially, walking two of the first three batters he faced, followed by giving up a two-run single to Jim Thome.

You could hear all of Tiger Town go "Uh-oh" at that point. It wasn't a save situation, but how was Rodney going to handle this closer thing? Not badly, as it turns out. After giving up those two runs, Rodney escaped further damage by getting a ground ball to end the eighth. And in the ninth, which will be his territory for the time being, Rodney struck out the side. When was the last time Tigers fans saw a pitcher do that to end the game?

Hopefully for the Tigers, this change wasn't made too late to make a difference in their season.

I wasn't sure what kind of turnout we'd get in today's GameThread. It's been a rough weekend, and no one could be blamed for being disheartened and wanting to take a break. But some of us just couldn't stay away. It's in our blood now.