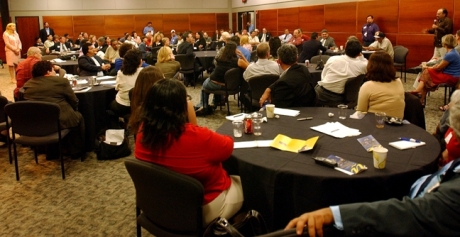 Hey, folks - how's it going? Heard any juicy trade rumors? I figured I'd open up the room, pull out some tables and chairs, and give us a chance to talk about what our Detroit Tigers could or should do over the next 24 hours or so.

Maybe it's a cop-out on my part, saving me from chasing down any little rumor that pops up. (LaTroy Hawkins? Really, Dave Dombrowski? A 5.71 ERA and just 23 strikeouts in 41 1/3 innings? Really?) But I also think we're sort of hearing the same thing now. Yes, the Tigers would like to acquire someone like George Sherrill, but don't want to give up what the Orioles want in return. Anybody else isn't really a difference maker.

There's probably not going to be any selling off, either. Not at 5 1/2 games out of first place on July 30. The Tigers are in the playoff race, even if you think they can't overtake the White Sox or Twins, let alone take on the Red Sox or Angels in a post-season series.

I think it's going to be pretty quiet in Tiger Town, but that's not to say I don't want to see the Tigers do something. It's just more fun that way. If Detroit can unload some extra baggage like Edgar Renteria and Gary Sheffield, that might somehow make them a better (though presumably less talented) team. But what are the chances?

So bring your own thoughts and opinions on this, if you're interested. What is the deal you wish the Tigers would really make? Or do certain players just have to start playing better? Can Detroit afford to wait any longer for that? Who's expendable, in the majors or minors? You try to trade him!