The Kids Are All Right: Tigers 8, Mariners 4

Share All sharing options for: The Kids Are All Right: Tigers 8, Mariners 4 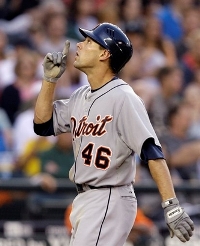 We already used the "Re-Joyce" headline this week, so we had to come up with something else, even though it was probably more fitting for Matt Joyce's performance last night in Seattle. But he definitely gets the Golden Tiger Claw for the second time in four days after going 4-for-5 while batting between Carlos Guillen and Miguel Cabrera. (You think he got some pitches to hit in that spot?)

Also for the second time in a week, we come to praise those that have risen from Toledo to help revitalize the Detroit Tigers' 2008 season. Red Bull gives you wings, but Mud Hens give you wins. Joyce wasn't the only recent call-up that had himself a career night against the Mariners. Michael Hollimon went 2-for-5, which included his first major league home run. And he didn't get a cheapie, either. (Is there such a thing at Safeco Field?) Hollimon showed off a classic power swing in blasting a ball deep into right-center field, over the outstretched glove of Jeremy Reed.

But as nice as that was to see for Hollimon, I have to agree with Billfer. How did the rookie not get a shaving cream pie in the face during his post-game interview? Did Ryan Field warn everyone to back off so none of that stuff would get in his hair?

One more Tiger Cub that deserves some praise is Clete Thomas. Even though he didn't get a hit, Clete showed some nice glove work in left field that got the BYB Brigade excited in the GameThread and made up for Marcus Thames' bat not being in the lineup. We're proud to say we began The Cult of Clete here, and there's plenty of room for joiners.

I was at a concert last night, so I knew I would've joined the fun late, but we had a big power outage in my part of Ann Arbor, so there was no baseball to be watched or listened to by the time I got home. And once the power returned, John Keating was discussing a Tigers victory.