Share All sharing options for: The Thunder Returns: Tigers 9, Indians 2 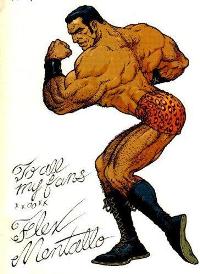 Whatever happened to the Detroit Tigers' offense over the holiday weekend in Seattle seems to have been remedied upon a return to Comerica Park. Maybe it was the familiar ballpark surroundings. Maybe it was a couple of nights' sleep in their own beds. Or maybe it was some of that Cleveland Indians pitching.

"Remedy" actually probably isn't a strong enough word for the muscle that the Tigers' lineup flexed tonight against Jeremy Sowers and Brian Slocum. The ballpark just couldn't contain the long balls Detroit was hitting. Miguel Cabrera - gimpy hip and all - went deep twice, first smacking a ball almost effortlessly over the left field bullpen, and then launching what's become a signature rocket to right field. Marcus Thames almost hit two home runs himself, breaking an 0-for-14 slump with a drive that hit the fence in the third inning, followed later by an opposite field shot in the fifth. Even Pudge Rodriguez got into the fun, with a blast into the left field seats.

But Thames wasn't the only guy who busted a slump tonight. Detroit's latest favorite punching bag, Edgar Renteria, snapped his 1-for-26 slog with a single in the seventh inning. If Renteria is going to find his swing against any team, it should be Cleveland, as he was batting .364 /.440/.636 with two homers and 10 RBIs in 25 plate appearances vs. the Tribe this season.

All that offense seems to have calmed Justin Verlander down, though he got off to a rough start after serving up a two-run homer to Jhonny Peralta in the first inning. From there, Verlander didn't allow another run or hit for his remaining six innings of work, and throwing enough strikes to keep his pitch count below 100 for just the third time this season.

Any chance the Tigers have some offense left for tomorrow night against Paul Byrd? Keep those bats warm tonight, fellas.

It looks like the BYB Brigade is back from the holiday, as we had a fine turnout for a fun night of baseball. (It was certainly much more relaxing than any of the games in Seattle or Minnesota.)