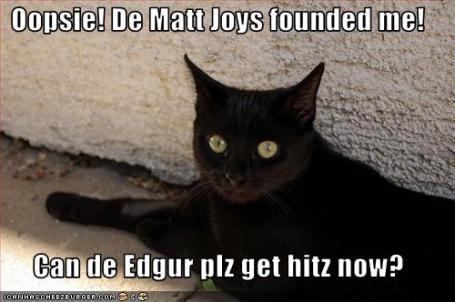 When I took over Bless You Boys before last season, there were a few things I wanted to make sure I did while writing for the site. That list of things to do is one item shorter now because I finally found a reason to post an image of a lolcat. Thank you, Matt Joyce. I'm sure the people from Animal Planet will be contacting you shortly about hosting a Detroit-based episode of "Animal Precinct." (No reason those "Animal Cops" people should get all the glory.)

If you have no idea what I'm talking about, here's the story from MLB.com's Jason Beck:

With rain forcing the Tigers inside for batting practice, they were in the cage when someone heard the sounds of a cat's meow. Matt Joyce grabbed a chair, took a look above the cage and found a black kitten tangled in the wires and cables of the stadium.

Joyce and some teammates took the kitten into the clubhouse and fed it, then Tigers personnel found an animal rescue program to help out. But the superstition was not lost.

Some players got a kick out of it. Others stayed away. Starting pitcher Justin Verlander avoided it because he's allergic to cats. Cabrera avoided it for the superstition.

Given how the Detroit bats responded last night, I don't see how this black cat can be seen as anything other than a good omen (Justin Verlander allergies aside). Of course, I understand the superstitions associated with such an animal.

But really, I'm riding the coattails of the gushing enthusiasm posted by Samela and the investigative reporting attempts of Billfer. I think Bill deserves credit for posing tough, probing questions that the beat reporters who cover the Tigers apparently didn't see fit to ask on behalf of a curious readership. The eventual caretaker of this kitty, his or her eventual name, whether or not someone will take a brush of orange paint to the kitty's hide, and the effect this beast will have upon the fortunes of the Detroit Tigers are all storylines to follow in the weeks and months to come.