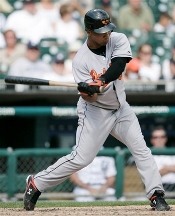 Do I have to write another woeful recap about a terrible Tigers pitching performance? I think we're tapped out on those. And I'm sure you don't want to read another one. Unless I could find another photo of a train wreck, explosion, or sinkhole.

So tonight, we'll try something different. This recap is dedicated to bowing before our Baltimore overlords. What Melvin Mora and Luke Scott have done to Detroit Tigers pitching this season is akin to barbarians destroying a village. I can imagine Dave Tremblay gathering his team in the clubhouse after today's game, asking them to form a circle around him, Mora, and Scott, and asking his two sluggers the following question:

To which Mora and Scott would respond in unison, "To crush your enemies, see them driven before you, and to hear the lamentations of the women."

Scott wasn't quite as dominating in this series, today's 3-for-6, 2 homer, four RBI performance notwithstanding. But in his seven games against the Tigers this year, he's batted .542 (13-for-24) with five home runs and 12 RBIs.

These two guys are stone cold Tiger killers. If you saw two gentlemen walking toward a team bus with fresh tiger skins draped over their shoulders, wearing the heads of those beasts as hats, chances are it was Mora and Scott. Wearing fur in 80-plus degree weather. That's how fearsome this pair was.

For the second time in three days, the Orioles' lineup hung double-digit runs on a Tigers pitching staff that may as well be throwing the ball underhanded. And we can't even blame today's 16 runs on favorite BYB whipping boy, Nate Robertson. No, Zach Miner had easily his worst start of the season, one in which he couldn't even make it out of the second inning. In just 1 1/3 innings, Miner virtually turned to quivering jello on the mound, giving up five runs, six hits, and four walks. Coming into today, Miner had only given up seven earned runs and walks in five starts.

But Baltimore scored 11 more runs, and we have the bullpen to thank for that. Casey Fossum: four runs. Aquilino Lopez: four runs. Francis Beltran: three runs. Fail, fail, fail. These guys weren't just gas cans today; they were tanker trucks full of petrol. And the Orioles treated that tanker truck like the 18-wheeler Batman flipped tail-over-head in The Dark Knight. And he needed a bad-ass motor scooter with grappling hooks and cables to pull that off. The Orioles just needed sticks of maple and ash. And, of course, that generous Tigers pitching serving the baseball up on a tee.

What a total traveshamockery. Detroit needs the Tigers to go on a seven-day road trip to get the smell of this homestand out of Comerica Park.

We had an active GameThread, but unfortunately, it sort of turned into accident gawking right away. By the end, men and women were trading cheesecake and beefcake photos. Those that remained, anyway. This is what we've been reduced to.