Share All sharing options for: Put the Tigers' Bullpen in Cruz Control?

One of the biggest questions the Detroit Tigers face is what to do about their closer situation. And if they don't figure it out during the off-season, it's a dilemma that could plague them throughout the 2009 season. An easy solution would seem to be giving Francisco Rodriguez $60 million over the next four years in a hefty free-agent deal, but handing out that kind of cash for a closer doesn't seem practical for a team that has several other holes to fill.

In today's Detroit Free Press, John Lowe wonders if the Tigers already have an in-house solution with Fernando Rodney. He's looked pretty good in the closer's role lately, having gotten saves in four of his last five appearances. Rodney has also pitched nine scoreless innings since his two-run, three-walk implosion three weeks ago in Tampa. Some of the success might be attributable to adjustments the coaching staff made in his delivery to provide more balance. But maybe Rodney is getting better at handling the responsibility, as well.

Even if Rodney settles the Tigers' closer dilemma, however, it only settles one issue for their bullpen. Between Todd Jones' likely retirement, Kyle Farnsworth's probable departure, Joel Zumaya's uncertain future, and inconsistency among the remaining pitchers, the relief corps could undergo a significant overhaul. Many of those new faces could come from the minors, whether it's a returning player like Francisco Cruceta, a rising prospect like Casey Fien, or a fast-tracked college pitcher the Tigers drafted in June, such as Ryan Perry or Scott Green. 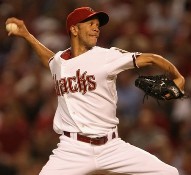 But if the Tigers want to look outside the organization for free agent help, it doesn't mean they have to shell out tens of millions for K-Rod. Looking out west still might not be a bad way to go, however.

Arizona Diamondbacks middle reliever Juan Cruz is set to be a free agent and hasn't had any talks with the team about signing a new contract. In the D-Backs' bullpen, he's somewhat buried behind Tony Pena, Chad Qualls, Jon Rauch, and Brandon Lyon, and hasn't had to deal with closing out games, so it's difficult to know if he's capable of handling such a role. But if the Tigers are looking to sign a good arm at a cheaper price, with the idea of at least pitching him in a set-up role, a guy who's thrown 55 strikeouts in 36 1/3 innings could fill that criteria nicely.

While Cruz would give the bullpen the strikeout thread it currently lacks, he might also contribute to a problem Detroit's relievers have had all season. One red flag in his stat line is the number of walks he issues. This year, Cruz has thrown 25 walks, which translates to just over six walks per nine innings. That would certainly be a concern to a team that booted Cruceta and Denny Bautista from their major league roster because of their control issues.

This year, Cruz has a 2-0 record and 2.97 ERA in 42 appearances, while spending some time on the disabled list with an oblique injury. He'll turn 30 years old this October. Would Cruz be worth, say, a two-or-three-year deal paying $3 million per season to the Tigers? They need the help, and this might be as proven a commodity as they can find for a lesser value.