Sometimes, a team needs its superstar to go out and win the game. Unfortunately, Detroit Tigers fans have seen that kind of performance far too often from the other team this year, from the likes of Melvin Mora, Jermaine Dye, Kelly Shoppach, and Billy Butler. Neither of those players are considered superstars, per se, but in too many games this season, they were allowed to beat the Tigers almost single-handedly.

At the same time, the Tigers have rarely seen one of their own players assert himself over a game like that. Maybe it's because they spent many of the past 130+ games trying to figure out exactly who could fulfill that role on their roster. And it's too late now to make a difference, in terms of the playoff race. But Miguel Cabrera appears increasingly comfortable with being that kind of star player for the Tigers. And yesterday, with a two-run homer and two-run double, he almost beat the Royals by himself. 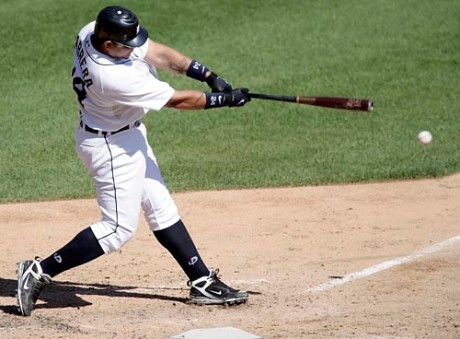 (Armando Galarraga's performance shouldn't be overlooked, of course. Two runs over seven innings should've been enough to earn a win. If only his lineup had scored a bit earlier in the game.)

Maybe we shouldn't call Cabrera a "superstar" quite yet. Jim Leyland thinks he still has some work to do in maintaining focus for every at-bat. (And did anyone else catch Pat Caputo calling Cabrera a "statistics hound" last night on FOX2 Sportsworks?) It hasn't been a perfect, MVP-type of season for Cabrera. But with each game remaining on the schedule, he's looking more and more like the player he was expected to be, making that trade look even better. It's one thing still worth watching over the remaining month of this season.