Will You Ever Learn, Fernando? Athletics 3, Tigers 2

Share All sharing options for: Will You Ever Learn, Fernando? Athletics 3, Tigers 2

Once again, like a rodent poking its head out from a hole in the wall, inconsistency comes back to plague the Detroit Tigers' offense. After launching baseballs all over the park for the last three games, the bats became meek and feeble against Dana Eveland and three Oakland relievers. How can a team get so little out of 10 hits? It's a question we've asked continually throughout this season.

Grounding into double plays wiped out some of those baserunners, which is something we've seen far too many times. But the batters that came up so big over the past few games were silent last night. Curtis Granderson, 0-for-5. Magglio Ordonez, 0-for-3. Miguel Cabrera, 0-for-2 (with two walks). Somebody else needed to be the hero, but other than Edgar Renteria, no one could drive in those runners.

Despite the lack of offense, however, this loss is on the bullpen. Nate Robertson threw a great game in his spot start, cruising through seven innings on only 79 pitches (60 strikes!), striking out six batters, and holding the A's to just one run on four hits. But despite the low pitch count, Jim Leyland took Robertson out of the game since he hadn't thrown much out of the bullpen lately. And that's where the trouble began. 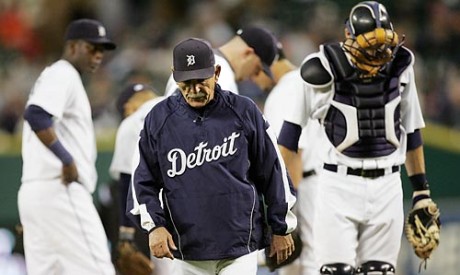 Bobby Seay walked the first batter he faced, who eventually made it over to third base. Fernando Rodney then came in and had an 0-2 count on Rajai Davis, only to follow it up with a meatball Davis smacked for a triple that tied the game. Davis was driven in two batters later, and the A's took the lead. We could write about how Tigers relievers don't seem to play smart baseball, but it's so much more fun when Leyland explains it.

"... we walked the first guy. You can't do that. If you want to stay up here and pitch and be successful, you can't make these mistakes. [On] 0-2 all year long, we've gotten killed, night after night after night. I mean, eventually you get tired of watching it. 0-2, right there, fastball right down the middle of the plate. You can't do that and win up here. You can't win close games doing that in the big leagues. It just won't happen. It's that simple. And we've done it time after time after time after time. It's not excusable. That means to me that you're just throwing the ball. You're just throwing the ball without any idea what you're trying to do."

Part of the problem is that Rodney came in for the eighth because Kyle Farnsworth was unavailable with an injured groin. But that doesn't change how Rodney pitched to Davis with an 0-2 count. Instead of throwing something that Davis might chase out of the strike zone, Rodney served up a pitch right down the middle. Another hitter might have taken that one out of the park. (Though he probably wouldn't have ended up on third base as fast as Davis did. Beep beep!)

This probably falls under the category of "Lessons for Next Season," which is how Leyland seems to be utilizing these last few weeks on the schedule. Unfortunately, these lessons are being learned at the expense of this season. Something Leyland has learned for himself - at the cost of several dozen cigarettes, surely - is that Rodney is not full-time closer material.