An elbow injury is what likely kept Clete Thomas from being called back up to Detroit once rosters could expand on September 1. What we didn't know, however, is how serious that injury really was. Unfortunately, no one - whether it was Clete himself or the Tigers' medical staff - realized it, either. 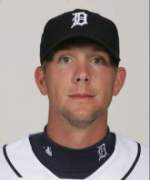 Thomas will have Tommy John surgery performed on his elbow by Dr. James Andrews ("the most valuable player in sports") in Birmingham, AL today, replacing a ligament that turned out to be torn, not strained. The original diagnosis, you might recall, when Clete was placed on the disabled list was a "strained elbow."

According to Jon Paul Morosi's story in today's Detroit Free Press, Thomas originally hurt his elbow in late June at San Diego while playing catch during batting practice. Yet Clete didn't quite let on about how serious the injury may have been and decided to play through the pain. Understandable for a player eager to stay in the majors. But Thomas's play suffered as a result, and he was sent back to the minors anyway a few weeks later.

Thomas tried to tough it out for two months (!) before the pain became too much to deal with and finally told team doctors what had happened. But as already noted above, their initial diagnosis wasn't on the mark and Thomas ended up trying to rehabilitate the injury when he should've been shut down. Only after a MRI was the true damage discovered. And who knows how much worse the ligament tear had become by then?

The typical recovery time for a position player having undergone Tommy John surgery is six to eight months. That would take Thomas well into Spring Training and affect his ability to make the team out of Lakeland. (We can certainly forget about him playing in the Arizona Fall League.) And that's if he recovers in six months. Eight months would take him into May. Morosi cites the example of Cleveland's Shin-Soo Choo, who had surgery last September 25 and rejoined the Indians on May 31 of this year.

As Thomas now sheepishly admits, if he'd spoken up back in June, he would almost certainly be ready for Spring Training next year. Of course, if team doctors had correctly diagnosed the injury, that might have helped, too. Perhaps that's an unfair criticism, since Clete initially just said his elbow was sore. But these sorts of misses have occurred quite a few times this season.

His performance this year was impressive enough to develop a small, though devoted following. The Cult of Clete grew in strength as fans saw what he could contribute to the Tigers, and the Clete's Cult t-shirt was easily the most popular at the BYB Gear store. Hopefully, we haven't heard the last from Clete or his Cult.