Edgar Renteria's Interesting Use of Pronouns

Share All sharing options for: Edgar Renteria's Interesting Use of Pronouns

Considering the Detroit Tigers could still finish this season with a losing record, at least one player in their clubhouse is pretty chesty about their chances next year. The boasts are especially notable, coming from a guy who's not assured of being in Detroit in 2009. Nonetheless, Edgar Renteria sounds pretty confident about the Tigers' chances of finishing these last two weeks strong and carrying that momentum into next season.

"We learned from the mistakes we made in trying to get it all back at once," Renteria said, "and we won't do that again."

Who is this "we" you speak of, Edgar?

And if he's trying to take on more of a leadership role with the Tigers now, where was this before? Especially after Pudge was traded to the Yankees? 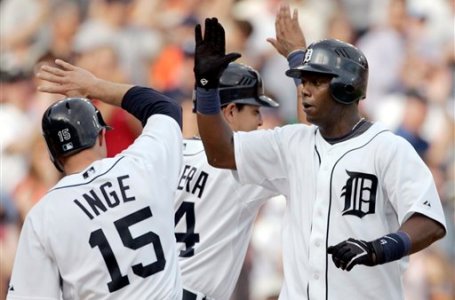 Maybe he knows something we don't. Despite a disappointing season (a .270/.320/.377, along with 15 errors), I think there's a decent chance of Renteria being the Tigers' shortstop again next year. This could be last off-season's Pudge Rodriguez dilemma all over again. The free agent crop of shortstops doesn't look all that great. There are a couple of notable names, but would they really be an upgrade over Renteria? The trade market doesn't look much better. Prospects like Danny Worth or Cale Iorg are probably at least another year away. And the Tigers can work around that $12 million contract option if they want to.

Am I advocating bringing Renteria back next year? No, but I'm not so sure it's a stone-cold lock, either. Unless he puts up some great numbers next year and flashes a slick glove, Renteria will always carry the burden of what the Tigers gave up in trade to acquire him. He or his teammates might not care about that, but a lot of fans likely won't forget.

So maybe Renteria wants to be a Detroit Tiger next year. Even if he plays for less money. He certainly seems confident of the team's chances, which might be factoring into his thinking. I think I can guess what the answer will be, but would you be okay with Renteria returning at a lesser price? If not, what would you prefer to see the Tigers do to replace him? And perhaps most importantly, do you share his confidence about next season?