Share All sharing options for: Joel Zumaya's Shoulder of Glass 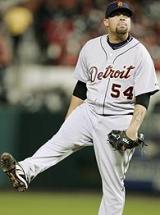 Once we had a love, pitcher who threw gas... Soon turned out had a shoulder of glass...

Seemed like the real thing, only to find... Shoulder got crushed, love's gone behind...

This might almost be funny, if it weren't so terribly sad. I don't know if Joel Zumaya was born under the proverbial bad sign or if he once kicked a gypsy while driving from Detroit back home to California, but the kid and that flamethrowing pitching arm of his are cursed.

Earlier today, Zumaya was diagnosed with a stress fracture in his right shoulder. He was examined after waking up with pain in the shoulder yesterday. According to trainer Kevin Rand, Zumaya threw a light bullpen session on Monday and felt fine the next day.

Team doctor Stephen Lemos found the injury upon examining Zumaya. The non-displaced stress fracture is in the right coracoid, a bone at the front of the shoulder. It's not known when exactly the fracture occurred, but as Rand said, it's not a sudden injury.

"It's something that happened over the course of time from throwing," Rand said.

So the fracture may well have been there when Zumaya was shut down back in August with a "sore shoulder." Along with the news that Clete Thomas' torn elbow ligament was mis-diagnosed as a strain, this has not been a stellar week for the Tigers' medical staff (at least in terms of public relations).

As we should come to expect when it comes to young Joel, this is a rare injury for a baseball player. Could this be somehow related to the reconstructive surgery he had on that right shoulder last November? Can that really be ruled out?

Regardless, Zumaya is facing a six-to-eight-week recovery period during which he'll be shut down from all baseball activity. Only after that will he likely be able to begin rehabilitation. And on that timetable, Zumaya would be ready for Spring Training. But how will the mandated convalescence affect whatever plans the Tigers may have had for him for next season?