Playing baseball in Chicago just hasn't been an easy proposition this weekend. After last night's rainout, a doubleheader between the Tigers and White Sox was scheduled for today. No one appears to have notified Mother Nature of these plans, however. The rain just hasn't stopped, and is coming down relentlessly. 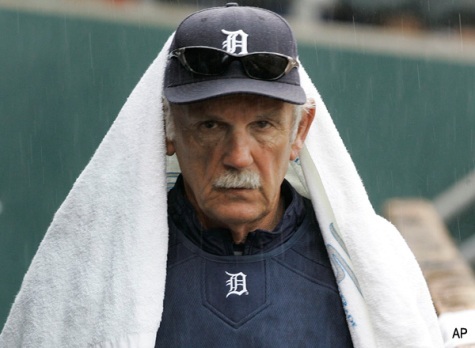 As a result, both games have once again been postponed, and the Tigers and White Sox will attempt to play a day-night doubleheader tomorrow. Game 1 is scheduled for 2:05 p.m. EST, with the second game set for ESPN's Sunday Night Baseball broadcast at 8 p.m.

Getting two games in tomorrow isn't a given, by the way, with yet more rain in the forecast.

Since this was to be a three-game series, however, we have a bit of a problem. The Tigers and White Sox don't have a common off-day during the remaining two weeks of the season. So if that third game needs to be played - and given the one-game margin between Chicago and Minnesota, that looks like a distinct possibility - it would be scheduled for September 29, the Monday after the regular season ends.

Justin Verlander will pitch the first game tomorrow, with Kenny Rogers taking the ball for the nightcap.