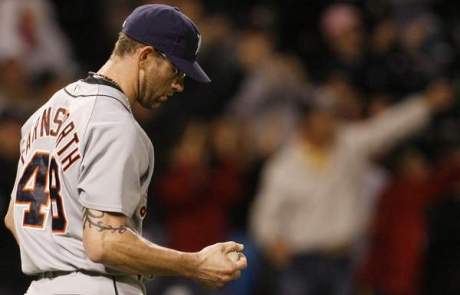 When does a grand slam for your team not mean a whole lot? When your bullpen turns around and allows a grand slam to the opponent in the next inning.

After Kenny Rogers put the Tigers behind 7-0 in the fifth inning (an extra five days of rest didn't seem to help him very much), a White Sox rout appeared imminent. But then Ozzie Guillen took John Danks out of the game. Maybe he figured there was no sense in gassing out his starting pitcher (Danks had thrown 95 pitches after six innings) with a seven-run lead. Maybe he figured that was too much of a lead for his bullpen to blow. The decision wasn't really looking that bad.

But then the Tigers began mounting a comeback. A two-run homer by Mike Hessman off Scott Linebrink in the seventh. Boone Logan served up a solo home run by Curtis Granderson to lead off the eighth. D.J. Carrasco gave up two straight singles. And then Octavio Dotel walked Miguel Cabrera to load the bases. Dotel struck out Gary Sheffield, which brought back that familiar dread of a possible double play grounder to follow. Except the next pitch to Marcus Thames was a meatball right down the middle of the plate that Thames just had to launch into the seats. Grand slam! Game tied!

Unfortunately, as with the Lions' failed comeback against the Packers earlier in the day, this only changed the terms of the eventual loss from embarrassing to heartbreaking, as the Tigers' bullpen had their own meltdown ready to unfold. After Bobby Seay put two runners on (one intentionally), Kyle Farnsworth came in and proceeded to do just what he's done ever since he joined the team at the end of July. He gave up a single to load the bases, then teed up his own fastball down the middle that Dewayne Wise blasted out of the park for a grand slam.

So much for that rally. And so much for playing spoiler this weekend in Chicago. (Detroit lost the first game of the doubleheader, 4-2.) WIth any luck, however, either the White Sox or Twins will pull away in the AL Central race, negating the need for the Tigers to come back after the season to make-up one last game and prolong this agony one day longer.