The Bane of the D-Train

Share All sharing options for: The Bane of the D-Train

I've been a pretty patient guy this season, despite the Detroit Tigers providing countless reasons for all of us to lose our minds. I even received an e-mail earlier this year, complimenting me on my "patient optimism," which I appreciated because I try not to be too reactionary. Well...with a week left in the season, I think I've had about all I can stand now. 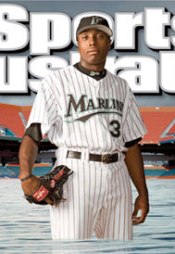 Could I just be in a foul, "FIRE EVERYONE!" mood because of the 0-3 Detroit Lions (though I actually haven't watched much of them because I declared before the season that they were dead to me)? Yes, that's possible. But after Dontrelle Willis's farce of a start yesterday against the Indians, I'm wondering if the Tigers might have no other choice than to say "Hey, we tried" and cut their losses with this guy.

How did Lloyd McClendon see it?

"At times we were pleasantly surprised by his velocity," acting manager Lloyd McClendon said. "But his walks were disconcerting."

There's the understatement of the year. "Disconcerting"? What, does Willis get a cookie for throwing the ball hard? C'mon. At least Jim Leyland throws a "horse(bleep)" in there for emphasis once in a while.

Any so-called progress that Willis showed in his start against Texas could've been tossed into Lake Erie after his 2 1/3 innings. Six walks! Along with six runs and five hits. I suppose the one consolation is that Willis somehow managed to retire seven batters (four via strikeout).

In just 3 2/3 innings against Cleveland this season (including the 1 1/3 he pitched back in June), the D-Train has a 34.36 ERA. He's given up 14 runs and 11 walks. That's a train wreck. One in which the cars are piled atop one another like twigs while bursting into flames.

Originally, I was going to suggest that perhaps there was something in the creepy smile of Chief Wahoo that unnerved Willis. Maybe he grew up with a fear of clowns or something like that and he's always trying to throw that baseball through Wahoo's teeth. Kind of like how Batman's always trying to get the guy that killed his parents. But the Tribe wore throwback uniforms yesterday, so that little pet psychological theory of mine doesn't really apply. (Though it did give me an excuse to make a Batman reference...)

Considering it was only Willis's second start since returning from the minors, maybe this is just a far larger reclamation project than ever could've been imagined and we (fans, media, coaches, front office) need to be a bit more patient with him. But the D-Train had three months in Lakeland and Toledo to try and pull himself together. That's almost as much time as he'd have during the off-season.

I'm sure some athletes and coaches would tell me that it's not the same, trying to do this sort of work during a season than away from the competition. But Willis was about as far away from major league competition as you could get while still being paid to play baseball. How is he looking just as bad as when he was originally sent down to Single-A?

But maybe we just need some perspective. What did Dontrelle think of his outing?

“Just a bad game,” he said Sunday, after surrendering six earned runs. “I like my mechanics. I like where I’m at. I just didn’t play good baseball. I’m not about to erase the chalkboard.

"Not about to..."? No, erase the chalkboard! Erase the hell out of it! In fact, pound those erasers into the chalkboard until you're choking on the chalk dust. You know what? Smash the chalkboard with a baseball bat. And stomp on the pieces with your spikes until all that's left can only be swept up into a dustpan.

If Willis isn't a lost cause, he looks damn close to one. Actually, he looks like a disaster. And it's going to end up costing the Tigers $29 million, with probably the most ridiculous contract Dave Dombrowski has ever offered to a player in his career as a general manager.

Because of that, the Tigers may have no other choice but to bite down and endure the pain. I said yesterday that I thought the suggestion of trading Willis for Julio Lugo was a bad idea - mostly because I don't think Lugo is that good. 24 hours later, I've changed my mind. This is not going to end well. If Detroit can find any team willing to take Willis, they should jump on the deal. Jump on it like a jungle tiger attacking an innocent antelope.