The Descent is Complete: Royals 5, Tigers 0

Share All sharing options for: The Descent is Complete: Royals 5, Tigers 0

If you like to keep track of such things, the honeymoon with Freddy Garcia lasted just six days. 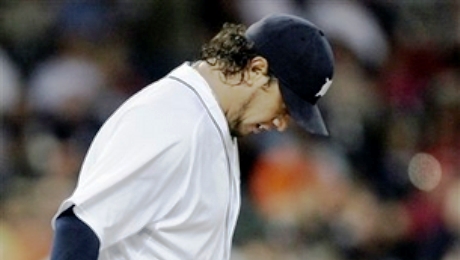 Some inconsistency probably should've been expected, with all the time he's missed, but... did he have to fall so far the other way? Garcia's line tonight: Five runs on seven hits in five innings. And three of those hits left the yard. Garcia did strike out six batters, so it wasn't all bad. But it was still pretty bad.

So was the Tigers' lineup. Four hits? C'mon. Even if Garcia threw a good game, it wouldn't have mattered. Score some runs for the man.

But if Garcia's not going to pitch well, I don't see much else to get excited about for the remaining five games on the schedule. Maybe he'll pitch the season finale. Maybe he won't.

Oh, and just in case you weren't sure, we'll (steal an idea from The Daily Fungo to) illustrate the point for you.

Welcome to last place, Detroit. Your baseball team has most certainly earned it.