Todd Jones Will Be Retiring

Share All sharing options for: Todd Jones Will Be Retiring 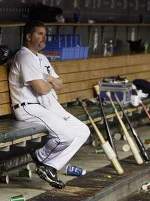 With all due respect to Todd Jones for a 16-year major league career, he picked the wrong day to announce his retirement.

Today in Detroit, the people are ready to throw a parade and shoot off fireworks for the Lions' long overdue firing of Matt Millen. Local sports talk radio has pre-empted programming all day to cover this. It's like cable news channels covering presidential election results. I'm pretty sure Kool and the Gang are on their way to downtown Detroit to perform "Celebration."

So even though Jonesy's official announcement won't come until tomorrow with a news conference in Detroit (and even though this news was expected), he's getting overshadowed just a bit. The Rodney Dangerfield of closers continues to get no respect. Kind of a shame.

Jones retires as the Detroit Tigers' all-time saves leader with 235, 81 ahead of the next closest reliever on the list.

At least he should get some headlines to himself by waiting until Thursday. And for all of the slamming Jones has taken in his eight combined seasons with the Tigers, he deserves some spotlight and applause for his achievements. Not too many players revive an apparently dead career the way Jones did in 2005.

We'll certainly have more on this in the days and weeks to come, as more details, quotes, and other such information becomes available.