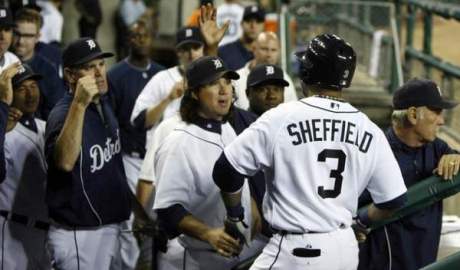 The Detroit Tigers may have won the baseball game last night, salvaging a bit of pride from a lost season. Yet the Tampa Bay Rays still managed to come out a winner, as the Red Sox's 19-8 (ouch!) loss to the Yankees yielded the AL East.

But the home crowd at Comerica Park had plenty to cheer for, thanks to Gary Sheffield's seeming determination to join The 500 Club before the season ends. Sheff must have been eating his spinach during his four-game suspension, giving himself one hell of a pep talk in the mirror, because he came out swingin' in his return to the Tigers' lineup.

Would Sheffield get #500 this season? almost seemed like a rhetorical question, especially once MLB sat him down for picking a fight in Cleveland last Friday. But apparently, no one told Sheff. After hitting two home runs last night, he now has 499 homers with two (but very likely three) games remaining on the schedule.

And what's gotten into Ramon Santiago? Does he have some bonus in his contract waiting for him if he hits five home runs this year? Ramon Sluggo hit his third home run in two days, suddenly showing the kind of pop that might convince the Tigers he can be their starting shortstop next season.

One other Tiger got two RBIs last night, and with those, Magglio Ordonez has reached 100 in that category for the third straight season.

Now that the Rays have clinched everything and can concentrate on the playoffs, might they shut it down for the next couple of games and give the Tigers a chance for a season-ending sweep at home? Along the way, maybe one of those Tampa pitchers can serve up a final meatball for Sheffield to chomp on.