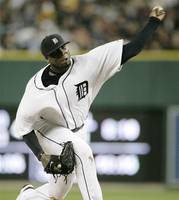 After clinching the AL East, there just wasn't much importance on tonight's result for the Tampa Bay Rays. These last couple of games are the equivalent of that fourth NFL preseason exhibition. Starters sit. (DRaysBay called tonight's lineup the "Tampa Bulls." Triple-A-rrific!)

Having said all that, three straight wins over a playoff team isn't a bad way to go. And though it certainly doesn't wash out the taste of a disappointing season, showing some pride for the final homestand of the season is at least respectful to the fans attending these games.

Leyland also got pretty misty at the end of his post-game interview on FSN Detroit, talking about how enthusiastic the fans were tonight ("it was almost like a playoff atmosphere in the ninth inning"), despite the team's poor showing this season.

"The fans put on one of their best performances tonight," Leyland said, while choking up.