Share All sharing options for: Chuck Hernandez is Now Unemployed 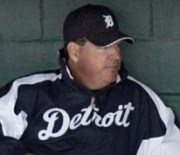 Detroit Tigers pitching coach Chuck Hernandez didn't have to wait very long to find out his job status for next season. According to Tom Gage, Hernandez was told before this afternoon's game that he had been fired. He was still in uniform for today's home finale, however, and will presumably coach tomorrow's make-up game in Chicago. He had one year left on his contract with the Tigers.

The Tigers' pitching staff finished the season with a collective ERA of 4.88, the third-worst total in the American League. (Only Texas and Baltimore were worse.) Besides Armando Galarraga (who began the season in Triple-A), virtually every pitcher in a Detroit uniform performed worse than he did last year.

Perhaps most troubling was the decline of Justin Verlander, whose ERA increased more than a full run. His walks also increased, while his strikeout totals went down. (Interestingly, the margin of difference in both categories was 20.) Hernandez also was never able to figure out what was plaguing Nate Robertson and Dontrelle Willis, both of whom struggled with mechanics and control of their key pitches to the point where they had to be removed from the Tigers' starting rotation (and in Willis' case, the major leagues).

Bullpen coach Jeff Jones was also dismissed. Everything that was said above Hernandez above could probably be applied to Jones, as well. Kyle Farnsworth's ERA rocketed from 3.65 when he arrived from the Yankees to 4.48. Relievers coming from the bullpen and putting hitters on base via either walk or hit seemed to be a regular occurrence, with no one seemingly capable of bailing out of a jam when needed.

Is it unfair to pin everything on the coaches? Sure. Injuries played a big part in the struggles of several pitchers, including Kenny Rogers, Jeremy Bonderman, Todd Jones, Joel Zumaya, and Fernando Rodney. And in several cases, those players kept their physical issues to themselves, only to finally have to admit their difficulties when they became too much to bear. (Of course, some of that has to be laid on the Tigers' medical staff too, who hardly had a good year.)

Ultimately, however, with a pitching staff that will undergo at least a partial overhaul this off-season, a change simply had to be made. If Hernandez was capable of figuring out what was wrong with his pitchers, he certainly didn't show it throughout the 2008 season.

So what do you think of this move? Hallelujah? Or is Hernandez being made a scapegoat for an underperforming set of players, some of whom may have carried around an over-inflated sense of entitlement coming into this season? And who might you like to see replace Hernandez on the Tigers' coaching staff?