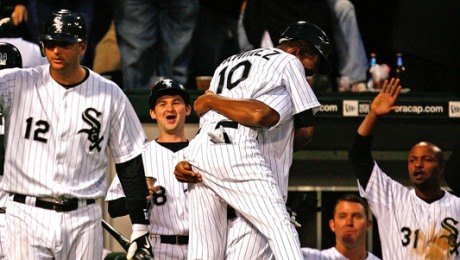 If the 18 games Minnesota played against Detroit this season didn't already clue you in to how miserable this season has been for the Tigers, Twins fans, today you joined us in the singular hell that we've had to endure from April through September.

Did you come into this game with some hopes? Any expectations? They were crushed, weren't they? Yeah, we're familiar with that.

You got a little bit excited as Freddy Garcia pitched well enough to win, didn't you? Yeah, he's pretty good. We hope he comes back to Detroit next year. That sinking feeling in your stomach when Garcia had to come out of the game, meaning the Tigers' bullpen had to take over? We've almost gotten used to it.

Did you grind your teeth or pull out any hair as Armando Galarraga and Bobby Seay loaded the bases? When Gary Glover was called in to pitch out of that jam, did you ask yourself "Who the #@$% is Gary Glover?" Did you throw something at your televisions or computers, or kick a nearby small animal when Glover hung a change-up on his very first pitch to Alexei Ramirez, which Ramirez then blasted into the left field seats?

Welcome to our world, baby.

Fortunately for you, Twins fans, you only have to chew on this for one night. Hell, maybe you've already gotten over it, since you get to take matters in your own hands tomorrow night against those White Sox. So the dark circles under your eyes, frown lines, pasty skin, and disdain for almost anything related to baseball won't have time to set in.

But hey, who doesn't love a one-game playoff to decide a division title? Maybe we'll tell ourselves here in Tiger Town that it was all for the good of baseball. One game, with a postseason bid on the line. Best of luck to you, Twins and White Sox.

And with that, the 2008 season has truly come to an merciful end for the Detroit Tigers. Let the off-season now begin.