Jim Leyland Has No Time For Bulljive

Share All sharing options for: Jim Leyland Has No Time For Bulljive 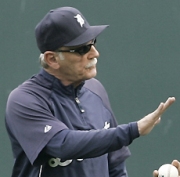 Jim Leyland already blew up at his Detroit Tigers once this season, when he felt his players were making excuses and rationalizations for their poor play. (I'm pretty sure I heard the eruption nearly across the world while in Malaysia.) He hasn't exploded quite like that since then, opting more for quiet seething, with terse statements sputtering out like steam from a boiling tea kettle.

As the Tigers now look toward 2009, however, Leyland wants to make sure his players show some accountability. Making excuses for their poor play apparently isn't going to fly next season, and the manager is pulling out some weeds before they have a chance to grow. So when Justin Verlander squawked about Chuck Meriwether's "tight zone" on Monday, Leyland pounced on it.

"You need to have the ability every once in a while to say, 'I stunk' -- not that the strike zone was tight," Leyland said. "You have to say, 'You know what? I was horse (manure).' It's OK, because we're all horse (manure) from time to time. It's good to admit that you're horse (manure) sometimes.

Just in case you were wondering, the author of that article, Jon Paul Morosi, felt it necessary to clarify that Leyland wasn't really saying "manure." As if we all didn't know the dirtier alternative is so much more satisfying when pushed through your teeth in anger than any family-friendly substitute.

I could be giving Leyland entirely too much credit here, but after reading his remarks toward Verlander and similar criticisms toward his hitters about hitting in cold weather among other such "cop-outs," I think he knows that he was far too passive with his players from the beginning of this season. We saw it almost right away. Why wasn't Leyland going out there to talk to his pitchers? Why wasn't he more aggressive with pitching changes? Why did he show loyalty to veterans who weren't producing as expected? Why wasn't he using the bench as a motivator?

With a veteran-loaded team, along with young players who'd had success early in their careers, Leyland probably believed he could be hands-off and these guys would lead themselves. Either that, or he just didn't know how to approach this particular mix of players coming out of Spring Training. And he wants to make sure he doesn't make the same mistake again, which is why he's putting out any late-season bellyaching now. We'll see if it carries over and makes any kind of difference next year.