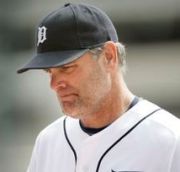 I think I've run out of disaster and wreckage photos to post as representation of yet another awful effort from the Detroit Tigers. It's also possible that I've just tapped the Google image archives clear out. I've had to go there too many times this year.

So instead we'll go with the frustrated look on Kenny Rogers' face, and how it reflects not only a terrible performance, but a season that's doing the dead man's walk toward September 28, the last game on the schedule. Last night's victory over the Angels was exciting, yet also aggravating because it reminded us what the Tigers are capable of and the promise that they've failed so terribly to fulfill. But today, the home team gave their fans a different, far more painful reminder. This isn't a very good baseball team, and the 2008 season has been a horribly cruel tease.

Rogers looks just about finished as a major league pitcher, one getting increasingly worse with each start. And today may have been hovering over rock bottom. He lasted just two innings, giving up six runs (two of which Aquilino Lopez couldn't keep from scoring) and eight hits - four of which began the third inning and knocked him out of the game.

Between today's performance, along with losing seven of his last eight starts, Rogers now admits he may see the end in sight.

"Trying to deal with that after a game like today is probably not the best way to decide those things," Rogers said. "Coming off the mound, though, it's hard not to think about it."

The decline is difficult to watch because his 2006 season - the postseason, especially - is still relatively fresh in our minds and could take on legendary status in the years to come. But Rogers' downturn underlines just how delicately this team's chances were from the very beginning. The Tigers needed that 2006 Rogers to compete for a playoff spot this season. Hell, even the limited-use 2007 version might have been enough. But he hasn't even been close. And, of course, neither have the Tigers.