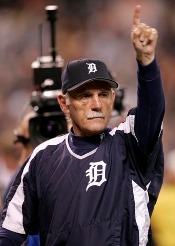 Earlier this season, Jim Leyland looked like a manager who wasn't going to be back next year. Not only were his Detroit Tigers severely underachieving, but they looked lackadaisical in doing so. For whatever reason - entitlement, arrogance, laziness - Leyland just wasn't getting through to his players.

Back in April, I wrote that a team not playing hard for its coach was a pretty damning indictment. Ultimately, what more could a coach or manager be judged upon? Some thought Leyland should be fired for the Tigers' disappointing performance, but I thought it was far more likely that he'd resign after the season.

But for the past month or so, Leyland's made it pretty clear that he intends to come back to manage the Tigers next year. For instance, he's talked about what certain players, such as Brandon Inge and Miguel Cabrera, need to do get better in 2009. He also revealed that he intended to make sure his pitchers study AL Central hitters more thoroughly in Spring Training. Defense would also be emphasized next spring in Lakeland.

Does that sound like a guy who's ready to walk away?

So it's really no surprise that Leyland told the Detroit Free Press' Michael Rosenberg that he'd like to sign a contract extension with the Tigers beyond 2009 and sees himself managing for a few more years. Leyland was likely to ink a deal for 2010, at least, as the conventional wisdom in sports seems to be that any coach on the last year of his contract is a "lame duck" with no hope of exerting authority over players signed for multiple years who know they'll likely outlast the man in charge.

But, Rosenberg asks, for Leyland to stick around, will things have to change? He's already indicated that he'll approach his players differently next year. He was far too passive with his pitching staff and was slow to lean on players who weren't always giving a full effort.

And what about the surrounding organization? Will Dave Dombrowski have to give him a different sort of team? Presumably one with some more speed and better pitching? Will Mike Ilitch have to maintain the financial commitment he made for this season, instead of cutting payroll as several observers expect him to?

It looks like Leyland wants the opportunity to correct the wrongs both he and his team committed this season. Knowing you can do better and getting the chance to do so can be a powerful motivator. And that seems to have given Leyland some energy. He no longer has the worn, haggard appearance of a man two steps away from burnout.

Now the question is, will Leyland's team follow his lead?