Share All sharing options for: An Empathetic Eighth: Tigers 6, Twins 4 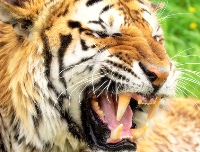 Okay, there can't be too much chest-beating about this one. 68-74, as you know. But any time the Tigers get a win at the Metrodome, it's worthy of doin' a lil' dance. Even if people are looking. Roar, Tiger, roar.

Though Detroit hasn't played that well against the Twins this season, winning only six of 17 games, one thing Detroit has managed to do is expose that Minnesota bullpen. In the games the Tigers have been able to win, they outlasted the Twins' starting pitcher and capitalized on the soft middle of their bullpen. (If Minnesota could hand the game over to Joe Nathan, forget it.)

Middle relief has cost the Twins several games in recent weeks, and could be the difference in them winning the AL Central. (Well, Carlos Quentin's broken wrist might play a role in that race, too.) Today's game was certainly no exception, as Scott Baker handed a two-run lead over to his bullpen, and Dennys Reyes held it for all of three pitches. Curtis Granderson took him deep over the baggie in right field, and the ballgame was tied.

With Reyes having failed to get his designated left-hander out, Matt Guerrier came in to stanch the bleeding, but two batters later, he hung a slider to Magglio Ordonez that he launched into the left-field seats. As excited as Tiger Town must have been, I wonder if some fans also felt pangs of empathy. Believe us, Twins fans - we're painfully familiar with those kinds of meltdowns.

The Tigers' "closer," Fernando Rodney, almost supplied one of his own in the ninth inning. And you knew it was going to be a rough save opportunity when he walked Nick Punto to lead off the ninth. Two singles later (one of which was a nice bunt by Alexi Casilla, but wouldn't result in a base hit in any other ballpark but the Metrodome), the bases were loaded and a Twins walk-off win looked almost imminent. But Rodney came back with a big strikeout of Joe Mauer. And somehow, some way, the fastball he threw to Justin Morneau, one which Morneau smacked hard for a sure, game-tying base hit, found its way into the glove of Placido Polanco.

For one afternoon, anyway, the Tigers got themselves a hard-fought win over the Twins. If only they could've gotten timely hitting and good enough relief pitching more often this season. Of course, Justin Verlander's effort (four runs, eight hits, and 114 pitches in 5 2/3 innings) provided a glaring example of how much Detroit's starting pitching has beaten this team down. He's still not right.

But today, it didn't matter. Do a little dance. Roar, Tiger, roar.