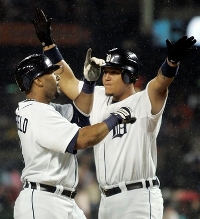 During the off-season, a few observers thought the Justice League lineup the Detroit Tigers assembled might be capable of scoring 1,000 runs. Apparently, the Tigers have decided they're going to spend September doing their best to reach that lofty number. Over the past three games, no ballpark has been able to contain these guys.

It was Home Run Derby at Comerica Park last night, with five balls getting launched into the seats off Oakland Athletics pitching. It might just be easier to list the Tigers that didn't hit a home run last night. But that would mean not mentioning Gary Sheffield, who not only had a fantastic night with two home runs and five RBIs, but also attached his name to one historically impressive number.

Sheffield's second long ball of the evening was the 250,000th home run in major league history. And his grand slam in the first inning was the 249,999th, which makes you wonder if someone in the dugout told him about that and he figured he might as well get the big number, too. It's like the baseball equivalent of having the top two scores on an arcade video game.

On the flip side, Oakland's Gio Gonzalez created a bit of history for himself, as well, becoming the roadkill underneath the Tigers' home run motorcade. Gonzalez not only gave up #250,000, but also threw the pitches that resulted in #249,998 (hit by Magglio Ordonez) and 249,999. That has to be worth at least a few appearances at card shows in the years to come.

You think there's any chance Gonzalez posed with Maggs and Sheff for a photo after the game? Nah...

One down note for the Tigers: Being handed a nine-run lead should really be enough for a starting pitcher. If you can't even get a decision with such a margin, you really didn't have a good night. Zach Miner, we're looking at you. Perhaps the focus wanes with an 11-3 lead and long breaks in the dugout. But in his last two starts, Miner has allowed 13 runs and 19 hits in 10 1/3 innings. Cause for concern? Could the innings he's thrown be catching up to him?

Back to the positives, Sheff's two homers also put him four away from the 500 mark for his career. Could he reach that number this season? Probably not, with 18 games remaining on the schedule. But it's possible, especially with some of the pitching the Tigers will be facing to close out the year.

Another number worth keeping an eye on is Miguel Cabrera's season home run total. As you know, the young man has been swinging a seriously hot bat in recent months (22 home runs since July 4) and his production has steadily moved him up the list of home run and RBI leaders. With 116 RBIs, Cabrera is currently fourth in the majors. But at 33 homers, he's second in the American League, and with Carlos Quentin's season-ending wrist injury, he has a decent shot at taking the lead in that category. (Alex Rodriguez and Jermaine Dye are right behind him, with 32 home runs.)

We also probably shouldn't underestimate the power of Tigers bloggers' birthdays as a determining factor in this power surge. Were those Detroit bats lifted in celebration for the births of Billfer and Samara? It's a theory that shouldn't be discounted. (I clearly missed the memo on birthdays when I signed up for this Tigers blogging gig. I'm a June baby.) Does the Tigersosphere have any more birthdays between now and September 28? This could be an important question.