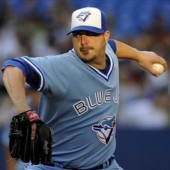 Is this really what it's coming to? During what's already been a long, cold winter for the Detroit Tigers in terms of finding bullpen, is the only source of heat going to be... John Parrish?

The Tigers have actually been interested in Parrish since early December, but I was kind of hoping that would be forgotten after the frenzy of the holidays. Or that Jon Paul Morosi just tripped over a bad rumor in Vegas after a long night at the tables with drinks.

Yet here we go again, according to a blog post by Morosi yesterday. I'm going to need some help here, because I don't get this at all. Parrish's biggest selling point seems to be that he's "a less expensive option than Joe Beimel." Oh, and his last name is Parrish, which might remind people of Lance (and hopefully not Larry).

He doesn't strike guys out (4.5 per nine innings), and doesn't have a stellar walk rate (3.2 per nine) to make up for that, either. And if Detroit is eyeing him as a situational reliever against left-handers, they're kidding themselves. Lefties hit .305/.364/.525 in 66 plate appearances against Parrish last season. Never mind that the Tigers already have Bobby Seay, Clay Rapada, and Rule 5 draft pick Kyle Bloom on the roster.

And maybe that's where the Tigers are really looking with this, which would mean I shouldn't get so worked up. Is it possible that Detroit is looking at Parrish more for minor league depth - and a call-up candidate, if needed - rather than a spot in the big league bullpen? He pitched well for Syracuse, compiling a 10-1 record and 2.97 ERA, with 100 strikeouts and 39 walks.

If Parrish is signed as a non-roster invitee to Spring Training, I could live with that. I just hope he's not the 2009 version of Gary Glover.