Share All sharing options for: Blame B.J. For No J.J.? 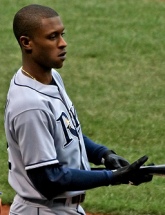 Did the Mets beat out the Tigers for J.J. Putz simply because Omar Minaya was offered the Mariners a better deal than Dave Dombrowski could? Since Minaya was able to get Franklin Gutierrez from the Indians and then flip him to Seattle, the easy answer is yes. But it may not have been quite that simple.

On his blog today, Jon Paul Morosi has an interesting footnote to the deal that wasn't. Ultimately, it may have been the Mariners' need for a centerfielder, and the unwillingness of the Rays to include one in a three-way trade with Detroit, that caused the deal to fall apart.

Why wouldn't the Rays play ball? They were worried about B.J. Upton's left shoulder, which required surgery to repair a torn labrum in November. And though he appears to be making a full recovery, Upton might not be ready for Opening Day. Knowing that was a possibility, the Rays wanted to hang onto back-up outfielder Fernando Perez.

So how did this affect the Tigers? Follow along with Morosi:

Seattle officials wanted a centerfielder, and they did not believe that Detroit prospect Matt Joyce could play the position on an everyday basis. So, the centerfielder would have needed to come from Tampa Bay – and the Mariners wanted Perez.

If Tampa Bay had been willing to trade Perez, it’s likely that Putz would be a Tiger right now. But the Rays were reluctant to do so, for a reason that is now apparent.

If only Tampa had signed Gabe Kapler before the Winter Meetings, instead of this week. What difference could that have made?

Maybe Edwin Jackson, the Tigers' consolation prize from the failed trade, will end up easing the lament. If so, maybe Dombrowski can pat Upton on the shoulder sometime this summer to show thanks. Just make sure to pat the right shoulder, not the left one.