The Quest For Relief: Do Tigers Have Lyon Eyes?

Share All sharing options for: The Quest For Relief: Do Tigers Have Lyon Eyes? 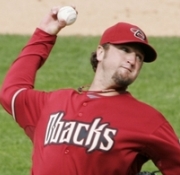 Could the Detroit Tigers finally be moving in on a closer? Jon Paul Morosi reports on his blog that the team is in negotiations with reliever Brandon Lyon. However, they haven't yet offered him a contract, which might put them a bit behind the competition.

According to Ken Rosenthal, Lyon's agent says that a team has made an offer of a two-year, $9 million deal. Who is that team? If the Tigers haven't made an offer yet, it could be the Minnesota Twins. The St. Louis Cardinals are also believed to have offered a contract, but only on a one-year term.

If the Tigers are indeed in competition with the Twins for Lyon's services, something that could tip his preferences in Detroit's favor is a closer's job. In Minnesota, Lyon would be the set-up man for Joe Nathan. But that's assuming both teams are making similar offers.

A deal for $4.5 million per season would fit the Tigers' payroll, if Morosi's guess that the team has $5 million available for a closer is correct.

Last year with Arizona, Lyon saved 26 games in 31 opportunities, compiling a 4.70 ERA in 61 appearances. With 44 strikeouts in 59.1 innings, he's not a lights-out strikeout pitcher. But he makes up for that with great control, issuing only 13 walks. (Maybe Lyon's control is too good, as he allowed 75 hits. Batters know they'll get something to hit.)

At 29 years old (he'll turn 30 in August) and not coming off any sort of injury, Lyon also presents a younger, healthier alternative to Jason Isringhausen. But would he bring the heat that the Tigers could use in a ninth-inning stopper?