The Tigers Are Back on Timo Time!

Share All sharing options for: The Tigers Are Back on Timo Time! 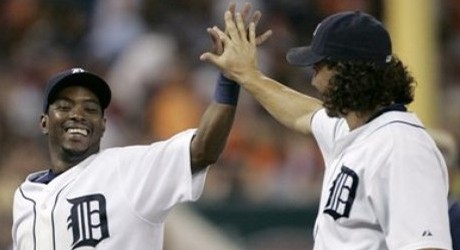 Could it be possible that the little something the Detroit Tigers were missing last season was some Timo Time? Sure, we enjoyed seeing young outfielders like Matt Joyce and Clete Thomas develop into major leaguers. But did they provide the boost that Timo Perez gave the Tigers in September of 2007?

Yes, we all gritted our teeth and slapped our foreheads when we saw Timo in the lineup, wondering why Jim Leyland continued to give him at-bats over, say, Cameron Maybin. But there was no time for on-the-job training. The Tigers were fighting for a division title. And Timo's production soon made his manager look pretty smart. In 73 plate appearances that September, Timo hit .414/.438/.543 with five doubles, two triples, and 11 RBIs.

Timo didn't see the majors in 2008, as Leyland parceled playing time in left field between Joyce, Marcus Thames, and Ryan Raburn. (That combination apparently impressed Leyland so much that he declared Carlos Guillen the left fielder for 2009.) And as nice as it was to see the Tigers develop a young, left-handed, slick-gloved outfielder, let's look at the numbers, shall we?

How about them apples? And what is one key difference between the 2008 and 2007 teams? Hmm? If this was a courtroom, I would rest my case. Give the judge some six-shooters with my index fingers, and holster those guns back in my pocket. HOO-ahh!

Clearly, Dave Dombrowski looked at the same insurmountable evidence and came to the same conclusion. Thus, he signed Mr. Perez to a minor-league deal yesterday. (Talk about burying the lede.) Keep Timo in the fold; don't let him give another team that September magic.

Carlos Guillen, you are on notice, sir. The Tigers may have given you the left field job to begin the season, but that sound you hear is the clock ticking. And that clock is ticking on Timo Time.