Share All sharing options for: The Quest For Relief Hears Crickets Chirping

"When are the Tigers going to sign a closer?"

That's probably been the most asked question over the past couple of quiet weeks, either posted here in the blog comments, sent in e-mails, or raised in actual conversation (online and in-person). 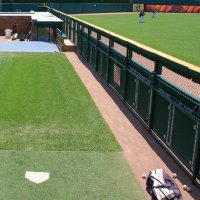 During that time, three notable relievers have signed with other teams. Joe Nelson went to the Rays, Derrick Turnbow took a minor league contract with the Rangers, and Brian Fuentes reached a deal with his top choice, the Angels. We know the Tigers pursued Turnbow, though with him quickly whittling his suitors down to three choices that didn't include Detroit, the feeling apparently wasn't mutual.

For whatever reason, the Tigers didn't seem interested in Nelson. Perhaps because the demand for him was so high. And they never really entered the market for Fuentes, either for financial reasons or because he'd cost the team a draft pick. With Fuentes signing for lower terms (two years, $17.5 million) than expected, I'm guessing Detroit was scared off by his Type A free agent status. Either that, or like Turnbow, he preferred to sign with another team.

So what now? Jason Beck mentioned that Detroit has "had talks" about Jason Isringhausen, but considering he's coming off surgery to repair a torn tendon in his elbow (and a bad season), that shouldn't get anyone excited. And if the Cardinals - who also need a closer - don't want him back, shouldn't that raise a red flag?

Lynn Henning is a buzzkill on BYB's reliever of choice, Juan Cruz, writing that his control problems (31 walks in 51.2 innings) might be scaring off the Tigers. (I think his Type A status is a concern, too.) Henning also cites a potentially high price tag, but with Fuentes getting less than $9 million a year, the market for Cruz is likely lower than expected. Perhaps they don't think Cruz is closer material.

(Consider also that Henning says Brandon Lyon doesn't throw hard enough for the Tigers' liking, yet also thinks they might still be interested in Trevor Hoffman. Huh? Hoffman, however, is now the Brewers' top target.)

MLB Trade Rumors hears that Chad Cordero is set to throw for teams this week, which puts him ahead of initial projections that had him ready in June. And looking in-house, Joel Zumaya might be ready to begin a throwing program within the next week or so. But who can predict if he'll be healthy by the time pitchers and catchers report?

Jim Leyland, meanwhile, isn't so sure his team will have a set closer by Spring Training. Beck passed along some quotes from last night's "Tiger Talk" program, in which Leyland sees Fernando Rodney as more of a "part-time" closer. The idea that Rodney could have a big year because he's in his free agent year makes me want to smash my head into a wall. Really? You're going to build your bullpen around that?

Not to put words in Leyland's mouth, but to me he's saying if the Tigers don't sign a reliever capable of pitching in the ninth - or if one of their prospects can't also help out in that role - they could be in some trouble.