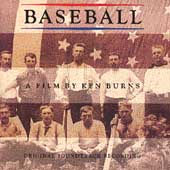 MLB Network earns some cool points with BYB by re-broadcasting Ken Burns's "Baseball" series, with the first episode airing tonight at 8 p.m. EST. The documentary was broken up into nine episodes (or innings), and one will run each week.

"Baseball" was originally shown on PBS in 1994. (Has it really been that long? Keith Olbermann - who wasn't much of a fan - was doing sports back then.) I remember watching it at the time, though it hasn't stayed in my memory very well. And I've always wanted to buy the DVD set, so I'm pretty excited about this. (I also really enjoyed Burns's "Jazz.")