Well, if you've been dying for the Detroit Tigers to do something - anything - in free agency, you got your wish tonight. They did indeed make a move, but unfortunately, it's not an addition to the pitching staff. And it's arguable whether or not this player will add much to the major league roster. 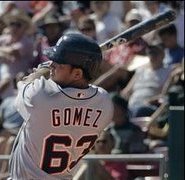 The Tigers brought back outfielder Alexis Gomez, signing him to a minor league contract. He's been in the minors the past two seasons, playing in the Marlins organization last year, and with the Rockies Triple-A team in 2007.

It's difficult to see how Gomez fits on the Tigers, though perhaps the team envisions him as a left-handed reserve while Clete Thomas recovers from shoulder surgery. According to Jason Beck, his contract will be worth $425,000 if he stays on the major league roster throughout next season.

Gomez is probably best known for his surprising contribution to the Tigers' postseason in 2006. In the ALCS vs. Oakland, he hit 4-for-9, with a Game 2 performance that included one home run and four RBIs. I remember him mostly for this picture taken during Spring Training that year, in which a trick of the light makes it look a pink bow is tied around his bat.