The Quest For Relief: No Return For Smoltz

Share All sharing options for: The Quest For Relief: No Return For Smoltz 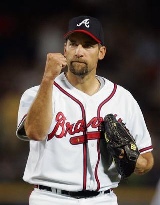 Throughout The Quest For Relief that's gone unfulfilled, a small flicker of hope has remained in the hearts of several Tigers fans. What about John Smoltz? Could he return to Detroit? Would he be interested in being the team's closer?

In my own mind, I kind of wrote off the chances of that happening, as I just didn't see Smoltz leaving Atlanta. That opinion was further influenced by an interview Bobby Cox had with ESPN's "Baseball Today" podcast a few weeks ago, in which he sounded like a manager who expected Smoltz to be in his starting rotation this season.

As it turns out, that instinct was half-correct. Smoltz will not be reuniting with the organization where he began his professional baseball career. There will be no return to Michigan. But he also won't be staying with the Braves for a 21st season.

Several reports indicate that Smoltz will sign with the Boston Red Sox. According to MLB.com's Mark Bowman, Smoltz opted for Boston's offer late Wednesday and will inform the Braves of his decision early this morning. Buster Olney reported that the contract will include a $5.5 million base salary, with an additional $5 million attainable through incentives.

So there won't be any romantic reunion through free agency in Detroit this offseason. Though we have no idea if the Tigers were truly interested in Smoltz, let alone looking at him as a starter or reliever, here's yet another player that could've filled a key need that's signing with another team. And that's getting more than a little bit frustrating.

What are the Tigers' plans for their bullpen? Anyone care to take a guess at this point?