Share All sharing options for: Jack Morris Reminisces on TBS

You may have missed it after the NLCS concluded on Wednesday night, but after the Phillies were done celebrating, TBS ran an interview between Reggie Jackson and Jack Morris. One of the things they talked about was Morris's no-hitter in 1984 with the Detroit Tigers. 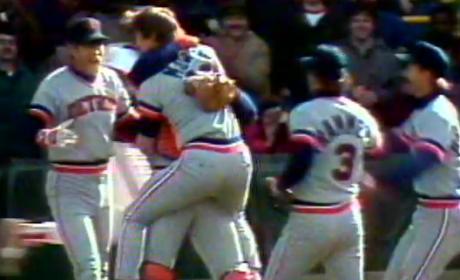 Here's what Morris had to say about it, courtesy of TBS:

"I had really good stuff in the bullpen and knew that something special was going to happen. I just had a feeling about it.

The funny thing about throwing a no-hitter is somewhere in the middle innings your teammates treat you like you have the plague and they distance themselves. I was never one of those guys. I’m always one of those guys who’s talking some crap in the dugout and wanted to involve myself.

When these guys started kind of not talking to me, I looking at my pitching coach Roger Craig and said, ‘what’s going on?’ He said, ‘Jack, you’ve got a no-hitter.’ I didn’t even realize it, this is in the sixth inning. I said, ‘Rog, relax, I’m going to get it.’"

Jackson also asked Morris about his drive to pitch complete games (he pitched 175 of them in his career), which Morris attributed to his teammates playing so well in support of him. But he also pushed them to play well behind him, leading to this amusing quote:

"I used to tease them, I used to shake the bat rack and my famous line throughout my whole career was, ‘get me 10, I’ve never lost with 10.’"

The two also discuss Morris's memorable 10-inning performance in Game 7 of the 1991 World Series for the Minnesota Twins. Morris is most definitely a confident man. But you already knew that.

Sorry, Blue Jays fans. No Morris memories for you. Maybe because he lost both games for the Jays in the 1992 World Series.

You can watch the whole video here.