There is Some Joy in Mudville

Share All sharing options for: There is Some Joy in Mudville

A few years ago, I got to write a magazine article about the clubhouse assistant whose job it was to rub the baseballs down with mud for the Detroit Tigers. Some people don't know that mud is used to take some of the sheen off the baseballs and make them easier to grip. This used to be the umpires' job, but they hated doing it, so teams began having their own guys get their hands (and the baseballs) dirty.

It's not just any old mud that's used to rub down the baseballs, either. It's a special sort of mud that comes in a jar, called Delaware Mud. Or to be even more specific, Lena Blackburne Rubbing Mud.

Why do I bring this up? Because CNN ran a story on the man who harvests this mud, shovels a bunch of it into barrels, strains and cures it, puts it into jars, and ships it off to every team. Each team requires only two 32 oz. jars per season. Very little goes on each ball. Maybe about a dime-sized dot. But it's plenty to give the baseball a grip. And you can definitely tell the difference.

There's definitely a technique to rubbing the baseballs down, as you'll see in the video. And when you have to go through five or six-dozen balls, you get fast at it, taking off the gloss in about two or three turns. (At least four players or coaches passed by while we were in the hallway and said, "Ask him about rubbing my balls," "Yeah, he rubs those balls real good," or some variation of the two.)

I was allowed to try it a couple of times (which a certain $18 million right fielder eyed suspiciously) and didn't get it right. I got too much mud on the ball, especially on the seams. "Yeah, the pitcher would definitely toss that one back," I was told.

Okay, enough about me. Here's the video:

And what the heck, I'll include the article I wrote, after the jump. (Along with the bad photo I took.) The publication in question no longer exists (folding more than two years ago), so I'm sure there's no issue with reprinting it now.

The old adage "It's a dirty job, but someone has to do it" doesn't quite apply to Scott Konczal. One of his jobs is, in fact, dirty, but he's more than willing to do it. Before a major league baseball game, the new balls have to be rubbed down with mud to take off the sheen that makes them slick and slippery. Such a task used to be handled by the umpires, but has since been passed along to team employees. That's where Konczal and his jar of Lena Blackburne Baseball Rubbing Mud come in. 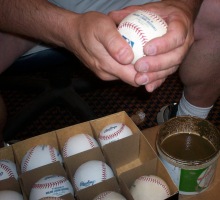 From his seat outside the Tigers' clubhouse, Konczal takes approximately an hour to rub down 72 baseballs. And when he opens the new box of balls, you see why this job is necessary. The baseballs are too white and shiny, too pristine to be played with. They slip right out of your fingers. They need to be broken in.

The rubbing mud is thin, smooth, almost creamy in its consistency. Is it really from the Delaware River, as the jar claims? Konczal says yes. How does he know?

"Because Ernie Harwell said so."

All that's necessary to get the ball game-ready is a dip into the jar. Not too much, just a half-dollar-sized dollop on the ball. Roll it around on your palms and fingers, coating the surface evenly, making sure there's not any excess or grit in the seams. Seconds later, the sphere in your hand looks more familiar. Ever so slightly dinged with brown, and much easier to grip. Play ball.

The instructions on the jar call for a slightly different rubbing (or "massaging") method. "If I did it their way," Konczal says, "I'd be here for hours." Considering he's been doing this for 10 years, it's safe to say his way works just fine.

The Tigers wouldn't have anyone else performing this crucial task. Another pair of hands rubbing down their baseballs is eyed with extreme suspicion. You know how ballplayers are with their superstitions.