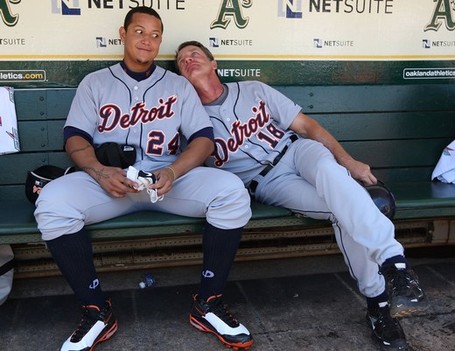 One member of the Detroit Tigers' coaching staff will not be back next season, but it's not the guy many expected (or hoped) would be gone.

First base coach Andy Van Slyke will not be among the five coaches of Jim Leyland's staff to return in 2010. It was not revealed by the Tigers, however, whether or not Van Slyke was dismissed or chose to leave. When asked to clarify that distinction by Jason Beck, Van Slyke said it was "irrelevant."

Van Slyke was an original member of Leyland's staff when he was hired by the Tigers in the fall of 2005. In addition to his game duties of coaching at first base, Van Slyke was also in charge of outfielders and baserunning.

Neither area was really a strength for the Tigers this past season. Even Curtis Granderson seemed to struggle at times in centerfield, especially when going back on fly balls (and UZR didn't look too favorably on the Tigers' outfield defense). And Detroit made numerous mistakes on the basepaths throughout the year, with Granderson, Miguel Cabrera, and Josh Anderson among those making costly errors in judgment. But there's no indication as to how much of a factor that played in this decision.

The other five coaches on Leyland's staff have been invited back for next season. For those hoping that Lloyd McClendon won't be the hitting coach, it's possible that some of the roles could change among the staff. Both Beck and Tom Gage reported, however, that the team will more likely seek someone to take over Van Slyke's duties. That coach will also probably come from inside the Tigers organization.

All signs seem to point toward Gene Roof, who's coached outfield and baserunning in the minor leagues since 2001, being the replacement.

So what's next for Van Slyke? He told Gage that broadcasting was a possibility, as that's what he was doing in St. Louis before he came to the Tigers. Trying his hand at managing is another option, though Van Slyke acknowledged he'd likely have to prove himself in the minors (or "ride the buses," as he put it). Van Slyke's son, Jared, plays football at Michigan, which could give him a reason to visit the area for another couple of years.

I would love to start a blog asking where Van Slyke goes from here, but I think Pat Lackey already has that covered.