It's Not Goodbye, It's See You Later

Share All sharing options for: It's Not Goodbye, It's See You Later 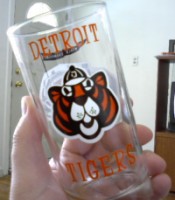 Well, the time has come. My virtual two weeks of notice have just about completed. I've cleaned out my desk and corner office at BYB HQ, while Kurt has moved in. If you scroll to the bottom of the front page, you'll notice the masthead has changed, with the new staff (and appropriate titles) in place.

To be honest, there have been a few times over the past two weeks in which I wondered if I was making the right decision. But that really speaks to how much I enjoy writing about the Detroit Tigers at Bless You Boys, and interacting with the great community of readers and commenters that's developed over the last couple of years. And when I see how much enthusiasm Kurt has in taking over, and the new ideas he's bringing with him, I know this was ultimately the correct move.

I'll still be showing my face around here to give Kurt whatever help I can. Besides, I need the creative outlet and enjoy participating in this community. (And I have a couple of pieces I really wanted to write before the end of the year, but couldn't finish them up.) But I do need to figure some things out for myself, and will take the opportunity to do so over the next month or two.

Since we announced the big change, several people have asked me why I'm stepping down. Rather than get into it here, I'll try to explain myself on my personal blog in the days to come. (Hey, what a chance to nab some readers!) And you'll still be able to e-mail me or find me on Facebook, if you ever want to chat.Though if you're looking for me to admit to multiple affairs with more than a dozen women or some sort of health issues, you'll be disappointed.

I will say, however, that it wasn't any one thing that led me to this decision. And I really do mean what I said in my original post: I know I wouldn't be able to do as good a job next season as I had before, and this site and community deserve better than that.

While chatting with another Tigers blogger last night, I said that one of the best things about doing this is to have people actually care what you think. For people to click over to BYB when breaking news occurs or just as a regular part of the day, seeing what discussion topics are being tossed out there, is truly gratifying and fulfills the best hopes of any writer.

I've received many notes of appreciation and kindness over the past two weeks, each of which are flattering and humbling. I haven't gotten around to responding to most of them, but I promise I will. But while I stillI have the stage here, I want to say that any blogger (sports or otherwise) yearns to have the loyal audience and community that you have provided me at BYB. When I took over this site three years ago, I saw it as a challenge, but honestly did not know what could be accomplished. You guys have exceeded any ambitions I may have had. And I can't thank you enough for that.

But if you'll pardon the indulgence, there are many people I would like to publicly thank. It'll probably come off like a bad Oscars speech, so I'll express my appreciations after the jump, rather than lose your attention and get pushed off the stage.

First, thanks to Larry Borowsky, formerly of Viva El Birdos, who originally asked me to manage BYB. I appreciate him giving me an opportunity I cherished, as well as his patience in waiting for me while I took a week (a whole week!) to make a decision, and a pat on the shoulder when necessary. (Thanks to Sean Yuille and Dave of Maize n Brew for their input into this process, as well.)

Thanks to Eric Simon, the MLB blogs manager here at SBN, for his support, counsel, and willingness to talk about baseball on a whim. To Trei Brundett and his tech team for their creativity and ambition in providing the best platform any blogger could have. And to Tyler Bleszinski, the founder and editor-in-chief of SBN, for creating an amazing sports blogging network, giving his writers every tool for success, and lending a valuable ear when needed.

Thanks to Bill Ferris, Lee Panas, Brian Borawski, and Samara Pearlstein for welcoming me into the Detroit Tigers blogging community when I took over BYB. Obviously, I'm biased, but I can't imagine there's a more supportive, encouraging group of sports bloggers around.

Thanks to Mike McClary and Kurt Mensching (as well as the aforementioned Mr. Ferris) for their friendship and the sounding board they've given me. Sometimes, I don't know how I would've done this day after day without having an outlet for my anxieties and neuroses.

Thanks to Tigers bloggers, such as Blake VandeBunte, Scott Rogowski, John Parent, John Brunn, J. Ellet Lambie, and Jennifer Cosey, who each contribute a compelling point of view to what's become an increasingly growing niche in the baseball blogosphere. Whether they realize it or not, each of them helped me rediscover some energy and enthusiasm with the fresh voices they've provided. Please read them.

Thanks to Pat Johnston and Todd Guerne, who actually thought putting me on the radio each week was a good idea. Short-lived as that was, taking a chance on me was much appreciated, and it opened a few doors for me.

Thanks to Big League Stew's Kevin Kaduk (and his colleague, David Brown), for supporting BYB from the outset. He's a great steward (pardon the pun) for the baseball blogosphere, and getting to write for the Stew on occasion has been a pleasure.

Thanks also to David Pinto (the Andrew Sullivan of the baseball blogosphere), who's linked frequently to BYB at Baseball Musings, and to ESPN.com's Rob Neyer. Both have steered many eyes toward my writing, which provided tremendous affirmation.

Thanks to the Kansas City Star's Sam Mellinger, who gave me one of my first interviews with someone in traditional media. He's become a friend and something of a baseball confidant, which I never could've expected. If only Detroit newspapers would provide their readers and fans someone who provides the same coverage and rapport.

Thanks to Joe Posnanski, the best sportswriter any of us have the privilege to read on a regular basis. I still can't believe he gave me an interview (and on terribly short notice). Also, thanks to Jordan Bastian and Richard Durrett, beat writers and bloggers who took the time out of their schedules to provide insight on the teams they cover for this site.

Thanks to Dan Levy, one of the great advocates for sports blogging on his On the DL podcast. Obviously, I appreciate him inviting me onto his show, but also for the support and camaraderie he's provided over the past couple of years. If you don't listen to his podcast, you're missing out.

Finally, the deepest thanks to my family (particularly my mother) and friends (especially my dearest friend, Allison), who encouraged me to see where I could take this thing. I know it wasn't always easy for them, and they've surely been frustrated as I put off many obligations and interests to devote myself to developing as a writer and making BYB the best Tigers blog I could. All I can say is, you're getting me back.

I hope I can reciprocate the support, camaraderie, and counsel that these people have shown me over the last three years, and will try my best to do so. I'm sure I'm forgetting some names, which seems unbelievable to me, given how much thought I've put into this. I'll probably remember them soon after hitting the "Publish" button.

All the best to each of you who have given me your time and consideration. You have made this a wonderful experience.