A-Rod Had Me... Until He Started Being A-Rod

Share All sharing options for: A-Rod Had Me... Until He Started Being A-Rod 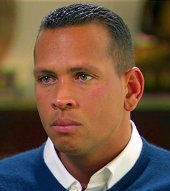 I know I can be a sucker, but Alex Rodriguez almost had me.

Maybe it was whining on his part, but I was ready to buy A-Rod's admission that he took steroids during his first season in Texas because he felt pressure to live up to that record-setting 10-year, $252 million contract. Expectations can be a hell of a thing. Here in Detroit, we saw how fast some Tigers tried to duck the championship expectations that so many of us put on them last year.

But it briefly looked like a true moment of candor from a player whose image seems manufactured down to the smallest detail. I've never had any dislike for Rodriguez as a player. In fact, I've always been quite impressed by his talent. But I certainly understand why so many refuse to embrace him or flat-out think he's phony. Very little about the guy seems genuine. Every move he makes, every word he says seems geared toward getting people to like him.

Sure, an athlete like Michael Jordan was manufactured for endorsements, but what we saw from him on the court was genuine. Think about how he celebrated after hitting that shot over Craig Ehlo in 1989. Or the shrug of the shoulders he gave to the scorer's table after hitting his sixth three-pointer vs. Portland in 1992. That was a man being overtaken by the moment.

Compare that to A-Rod's fight with Jason Varitek in 2004. Didn't Rodriguez try just a little too hard to look tough? (I've always thought he was mouthing those curse words to Varitek's face a bit too demonstrably.) And I'm not even getting into the ol' "slap-and-run" he pulled later that year in the playoffs.

If only A-Rod's chat with Peter Gammons could've ended after what appeared to be a rare moment of humanity. Of course, it couldn't because Gammons had to conduct an actual interview and push the issue with some questions. (You can read the entire transcript at Big League Stew.) And that's when the rehearsed A-Rod came back. I particularly enjoyed when he used this as a defense:

Back then it was a different culture. It was very loose. I was young, I was stupid. I was naive.

It's as if A-Rod stepped off the bus from Kansas and dropped into Haight-Ashbury of the 1960s. Hippies were everywhere, man... I was listening to Jefferson Airplane... It was free love!

But here's where he finally lost me:

...there's many things that you can take that are banned substances. I mean, there's things that have been removed from GNC that today would trigger a positive test. I'm not sure, exactly, you know, what substances I used, but whatever it is, I feel terribly about it.

He's not sure what he used? There's an original defense. And I know this is hardly a fresh rebuttal here, but a world class athlete worth $252 million knows what he's putting in his body.

Sure, I could see a guy who wants to bulk up or slim down start scarfing down protein bars without checking to realize some of them contain more sugar than candy bars. I don't even look at a bottle of fruit juice anymore without checking if it contains high fructose corn syrup. And I'm just a schlub concerned about his weight.

But somebody who's handled his career as meticulously as Alex Rodriguez just stuck a syringe in his butt without knowing what was in it? A clubhouse attendant didn't just slip A-Rod a brownie with some Primobolan baked in it. It's not somebody's bottle of rhinoceros testosterone. That is real deal, engineered in a lab, professional grade stuff.

So Rodriguez has now thrown himself at the mercy of the people and admitted he tried to get an edge - an edge he probably didn't even need with his physical gifts. By at least copping to the crime, following the New York Yankee handbook written by Andy Pettitte and Jason Giambi, he shows he's smarter (and maybe even less arrogant) than Roger Clemens or Barry Bonds.

Does he still have to try so hard to get us to like him? With the frowns and the near-tears and the pleas for understanding? Maybe this de-legitimizes him in the eyes of some. (And others are probably just weary of seeing the headlines hogged up by what's going on with the Yankees.) For the majority of baseball fans, however, I'd say this is just more of an unfortunate moment. It just gives us some more ammunition with which to make fun of A-Rod. And I (along with the rest of the baseball blogosphere) am kind of grateful for that.