What Jim Leyland's Speech Should've Been

Share All sharing options for: What Jim Leyland's Speech Should've Been

Today is the first day of full team workouts for the Detroit Tigers in Lakeland, which gives Jim Leyland the opportunity to address his team about the upcoming season. 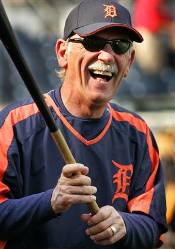 He's apparently already given his annual speech to the players, broken up into smaller groups, and emphasized the need to be prepared for things like colder weather to begin the season. Leyland doesn't want to hear anything about warming up once the temperature rises.

But while he has the full team's attention, I'm hoping Leyland shoots off a version of the rant he gave to reporters last May, shortly after an incendiary piece about the state of the Tigers ran in USA Today. All of the complaints about expectations, clubhouse atmosphere, and general excuse making set Leyland off. (Especially since much of it came from Jason Grilli, who had already been shipped out to Colorado.)

It was the eruption Tigers fans had been waiting for. And as the molten hot magma cooled, Leyland asked Jason Beck a question that might be among the funniest things he's ever said.

I was out of the country at the time, but Big Al filled in and was all over it. Fortunately for all of us, WXYT posted the tirade for download. (You can get the file from the accompanying link at the end of the post.)