Share All sharing options for: Ryan Perry's Slingin' the Cheese

While Joel Zumaya is easing back on the throttle, having learned that he doesn't have to impress everyone by hitting 100 m.p.h. on the radar gun, another Detroit Tigers pitcher is showing off his rocket arm. And people definitely took notice of Ryan Perry yesterday. 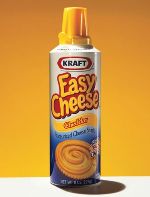 Dude was slingin' it. Jim Leyland was practically giggling at the thought. And perhaps even more impressive was that Perry's pitching motion made it look easy.

Of course, it's far too early into Spring Training to determine whether or not Perry pitched his way onto the team. Not when the Tigers haven't even played a game yet. And even if he does dazzle Tigers coaches and executives, it's more likely that he'll begin the season with Double-A Erie to get the tutelage he needs on his secondary pitches.

Trying to manage expectations, Leyland pointed out that Zumaya needed four years in the minors before reaching the big leagues. But Perry is coming out of college, pitching three years at the University of Arizona. That experience was surely a key factor in the Tigers' decision to draft him. (Justin Verlander, remember, needed only one year in the minors after three years at Old Dominion.)

Plus, as Kurt lays out at Mack Avenue Tigers, there might only be one spot open in Detroit's bullpen, and Leyland might prefer it go to a left-hander.

The most entertaining quote about Perry yesterday, however, may have come from the guy who caught his bullpen session, Gerald Laird. What did he think of Perry's stuff?

"Easy cheese," said Laird. "He's very impressive. Electric fastball, as everyone knows, but he has a really good slider and changeup, too.

"Stuff-wise, it's all good. The ball just jumps out of his hand."

That's not really nickname territory, I guess. Not with terms like "big arm" and "Commodore" being thrown around yesterday. But think of the marketing opportunities.