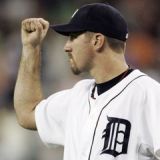 Could the Detroit Tigers have their first arbitration hearing with a player since Dave Dombrowski took over as the team's general manager?

The Tigers weren't able to agree on a contract with Justin Verlander before hearings were set to begin as of February 1. And here we are: February 2, and still no agreement between the two sides.

As Tom Gage points out on his blog, all that's known is that a hearing is set to take place between now and February 20. Though the exact date has been scheduled, it hasn't been revealed because the arbitrators aren't supposed to know in advance whose case they'll be hearing. With pitchers reporting to Spring Training before position players, however, it's likely that Verlander's hearing is on the earlier side of the schedule.

Just to refresh your memory, Verlander is asking for $4.15 million, while the Tigers countered with a $3.2 million offer. A contract in the $3.75 million range seems like a reasonable settlement, but even if an arbitration hearing were to take place and Verlander won the ruling, that's a pretty good deal for the Tigers in this current market.

If a hearing is to be avoided, however, this would seem to be the week for an agreement to be reached. Stay tuned.