Share All sharing options for: Dontrelle Willis: Still a Work in Progress 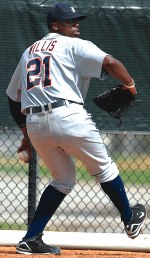 Is your glass half-full or half-empty when it comes to Dontrelle Willis? It's a question worth asking, because how you view his outing today probably depends on your outlook.

When you look at the boxscore from this afternoon's game vs. Toronto, do the four runs (two earned) Willis gave up in one inning make your hair stand on end? Or do you look at the one walk he allowed, and make that "hey, not bad" face?

It's a well-worn Spring Training cliche, but in this case, maybe we need to consider that Willis really is working on some things. (Such a platitude might apply to him more than any other Tigers pitcher in major league camp.) For him, that means keeping the ball in the strike zone and probably serving up some hittable pitches. Is 25 strikes out of 43 pitches pounding the strike zone? Well... that's about 58%.

For what it's worth, Tigers coaches said they wanted Willis to emphasize repeating his delivery, according to Jason Beck. And both Rick Knapp and the D-Train (that could become a sitcom this season) say they were generally happy with this opening effort. But unless Willis completely imploded - as we saw last year - was that going to be the company line today?

Obviously, it's just the first outing of the spring for Willis, so too much shouldn't be read into this. It was probably too much to expect for him to show pinpoint control and breeze through two innings. (Though I'll admit I was hoping for that.) But it's certainly disappointing to see that he struggled.

So how does your glass look? Half-full or half-empty?