Share All sharing options for: When Mothers Meet Tigers

I've been meaning to post this for the last couple of weeks, but got sidetracked by news of the day (Brandon Lyon signing) or just could never find the right time. But with things currently quiet in Tiger Town (and I imagine they will be until pitchers and catchers report next week), here's my chance.

As you know, the Tigers held their Winter Caravan across the state two weeks ago, leading up to TigerFest. One of their stops was at the University of Michigan's Mott Children's Hospital, a place that not only holds a special meaning for Brandon Inge, but happens to employ my mother as a nurse.

Word gets around the hospital that some Detroit Tigers are there to meet with the kids, so my mother goes down to check things out before her shift ends. (Knowing that her son spends way too much time on his Tigers blog, I'm sure she also wanted to throw some names at me later on.) As she approaches the clerk's desk, she notices a small crowd gathered around.

"One of the Tigers is over there," her co-worker says. "I'm not sure which one."

My mother waits until the people scatter away, then goes over to say hello. "He was shorter than I expected," she told me later. (Mom thinks all professional athletes are supposed to be the size of Wilt Chamberlain.) "Kind of small for a baseball player. Is he any good?"

The baseball player notices my mother staring, smiles and says hello. "You play for the Tigers?" she asks. He nods, still smiling. According to her, this is what she said next:

"My son is a huge fan of the Tigers! He's a grown man, but he loves you guys. He watches you every night and cheers you on. Talks about you all the time! Oh, could you sign something for him? He'd be so happy! Let me find something for you to sign..."

My mother then reaches into her pocket and pulls out an index card. The player smiles, asks to whom he should make it out, and signs the card. The two of them exchange thanks and carry on with their respective days.

"He was very nice," Mom said. "Very humble, too. He seemed kind of shy. Who's number 15? Is he the one who donated all the money?"

One of the questions that came to mind, of course, was, "Ma, you couldn't have mentioned the blog? Maybe say your son would've loved to do an interview?" But I didn't want to seem ungrateful, and I wasn't. Besides, that wasn't really the time or place for such a thing. And what Mom did was pretty cool.

Here's the card my mother handed to me a few hours later: 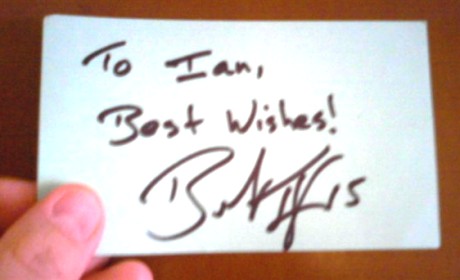 So does this mean Brandon Inge is my Tiger this year?