Baseball Prospectus on the Tigers' Prospects

Share All sharing options for: Baseball Prospectus on the Tigers' Prospects

Plenty of eyes will be on prospects like Rick Porcello and Cale Iorg during Spring Training, so the release of Baseball Prospectus' list of Detroit's Top 11 Prospects comes just in time. 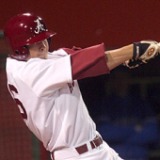 No surprise as to who tops Kevin Goldstein's ranking of up-and-coming Tigers. Porcello is King of the Hill, as he is far and away the brightest star in the Detroit system. But what makes Goldstein's list interesting compared to John Sickels' and Keith Law's is where Iorg sits on his list.

Neither Sickels and Law seemed too high on Iorg, but Goldstein has him ranked right behind Porcello. (Goldstein acknowledges, however, that the seven players he has rated as three-star prospects could be ranked in any order.) His best-case scenario has Iorg projected as a Khalil Greene-type of shortstop. (Whether that's a good or bad thing depends on how you look at this, I guess.)

Goldstein also ranks the Tigers' best 10 players aged 25 or under, and still thinks highly of Edwin Jackson as a talent.

In correspondence with Goldstein's prospects list, the Tigers' minor league system was also featured on Baseball Prospectus Radio. Brad Wochomurka spoke with Iorg about taking time off from baseball while on a mission to Portugal, and what a humbling experience the past year has been.

Also interviewed was Detroit's director of player development Glenn Ezell, who talked about Porcello, Ryan Perry, Ryan Strieby, and Casper Wells. (Wochomurka is a Tigers fan and clearly knows their system well. At one point, Ezell gets so excited talking about Wells that I think he calls Wochomurka "pardner." Though maybe he calls everyone that.)

You can download a MP3 of the show here.