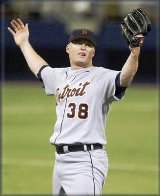 Sorry, Jim Leyland - we're raising a red flag. The Detroit Tigers manager tried his best to manage expectations on Thursday, when Jeremy Bonderman was scratched from his Saturday start because of a stiff shoulder.

Remain calm, Leyland said, all is well. Bondo would instead pitch in a simulated game where coaches could watch him more closely, and his pitch count could be controlled exactly. (Such a strategy didn't look so bad after Dontrelle Willis pushed through 43 pitches on Friday.)

But what are we to think after the Tigers canceled Bonderman's simulated game, opting to prescribe anti-inflammatory meds and sit him down for a couple of days? I kind of feel the same as when I'm watching a movie and a character coughs noticeably. Okay, something bad's going to happen.

In his latest "Under the Knife" column at Baseball Prospectus, Will Carroll reported that he'd been told the Tigers knew Bonderman's timetable was behind the ideal throwing schedule. However, it wasn't so far behind to raise concern. A more patient approach would be necessary. Ultimately, the strong track record for pitchers recovering from this sort of surgery should be considered.

What do you say, Jim Leyland?

"I'm not sure what to believe," Leyland said. "But we're not going to do anything stupid."

Okay, so there's that. Maybe this mostly needs to be chalked up to the beginning of Spring Training, as Bonderman reacclimates himself to movements and exertions that he hasn't made since last June. At least he's saying when something doesn't feel right, and not trying to push it, which is sort of what got him in trouble before.

Meanwhile, I just hope we don't hurt our own shoulders waving red flags.