Share All sharing options for: Did Zach Miner Blow His Chance Today? 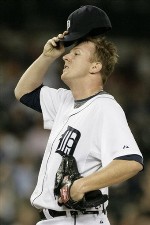 Apparently, Zach Miner didn't get the memo that candidates for the fifth spot in the starting rotation need to begin pitching better. (Unless your name is Rick Porcello.)

With the job still presumably there for the taking, as neither Dontrelle Willis nor Nate Robertson show a capability to win it, Miner had a chance to show Jim Leyland he should still be considered a viable candidate for the position. If that was indeed the circumstance, and Leyland's recent remarks would seem to say that it is, Miner fumbled the opportunity this afternoon against the St. Louis Cardinals.

In three innings of work today, Miner gave up three runs and seven hits. Four of those hits were for extra bases; three doubles and one home run. On the bright side, Miner didn't walk anyone (definitely a plus) and struck out two batters. But it was hardly the sort of outing that might ease down the throttle on The Rick Porcello Bandwagon.

But maybe it wouldn't have mattered how Miner pitched today. As Kurt posted in the comments of our previous post, Leyland may have already decided that Miner is ticketed for the bullpen. Here's the quote from Alden Gonzalez (filling in for Jason Beck on the MLB.com Tigers beat):

"I think he needs to maybe prepare himself for relief. I'm not talking necessarily about right now. ... We know he can start -- we think he can start and do a decent job. He hasn't shown for sure that he can relieve as effective as he should. So he needs to do that. ... In his case, I think there will always be a situation where somebody may be looking for a little bit more of an edge from the starter, so he needs to learn how to make the adjustments to pitch out of the bullpen."

This is pretty consistent with how Leyland has viewed Miner over the past couple of seasons, however. Whether it's because he's enamored with a sinkerball out of the bullpen or perhaps a contract status that allows the Tigers to use him in a swing role, Leyland's never seemed too keen on Miner as a starter.

However, with the tumultuous performance of the other fifth starter candidates, along with the presumed desire to keep Porcello on a conventional timetable in the minors, there was an opportunity to be seized. Perhaps there still is, but both time ( three-and-a-half weeks remain in Spring Training) and Leyland's patience appear to be running out.